19-year-old arrested after fleeing from police 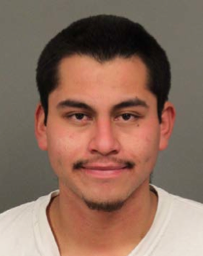 On Thursday Jan. 2 at about 5:50 p.m. the Paso Robles Police Department arrested 19-year-old Rafael Anguiano-Aguilar of Paso Robles after he failed to yield to officers who tried to conduct a traffic stop on his vehicle.

Officers initially saw Anguiano-Aguilar driving his Chevrolet truck along the 3000 block of Spring Street. Officers attempted to stop Anguiano-Aguilar after recognizing him and realizing he had three misdemeanor arrest warrants.

Anguiano-Aguilar did not initially yield for officers and tried to evade them by circling the block at speeds of approximately 50 m.p.h. Anguiano-Aguilar eventually stopped near 30th and Oak Streets and ran on foot from officers. Officers quickly located Anguiano-Aguilar by using a police canine who found him hiding at a nearby friend’s residence.

Anguiano-Aguilar was subsequently arrested and transported to the San Luis Obispo County Jail where he was booked for his arrest warrants and attempts to evade arrest.