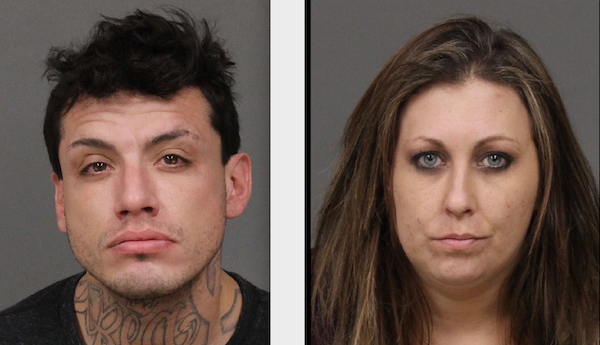 –Just after midnight on Saturday, Jan. 11, officers from the Paso Robles Police Department responded to a report of a man setting off fireworks in the alleyway of 1900 Park St. Upon arrival, the initial officer located a black Nissan driving southbound in the alley of 1800 Park St.

When the vehicle noticed the police unit arrive, the driver immediately sped off. The officer attempted to conduct a traffic stop on the vehicle which continued at a high rate of speed making additional turns. Once a second patrol unit arrived in the area, the vehicle slowed down to yield in the 2200 block of Park St. As the vehicle came to a slow rolling stop, the passenger, who was later identified as Rudolfo Cerda III, ran from the vehicle. The driver, Nicole Gatto remained in the driver’s seat and was detained on scene. The second officer on scene chased Cerda III and was able to apprehend him several blocks away from the vehicle.

Once in custody, the officer learned Cerda III was a known gang member and a parolee at large. Cerda III had approximately 5 grams of suspected fentanyl and several .40 caliber live rounds of ammunition in his possession. Officers began their investigation on the scene and learned Gatto had a misdemeanor warrant for her arrest and was in possession of suspected illegal narcotics. Inside the vehicle, officers located narcotics, two sets of bolt cutters, a pair of gloves, and a full black ski mask. Officers searched the area and the path Cerda III had ran and located a loaded .40 caliber Glock with a 30 round high capacity magazine. Both Rudolfo Cerda III and Nicole Gatto were booked into SLO County Jail on multiple charges.