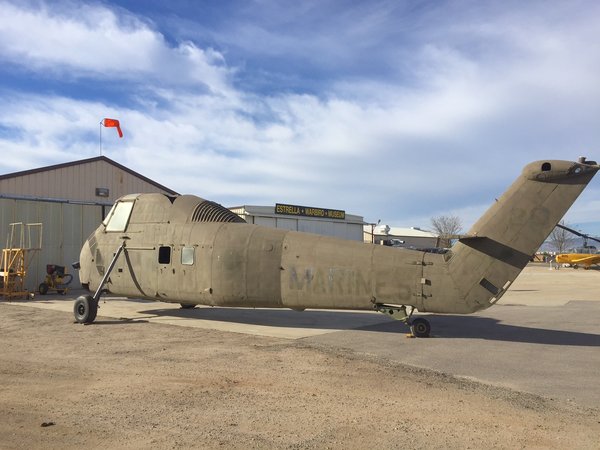 –The Estrella Warbirds Museum recently acquired two Sikorsky helicopters from the Fox Field Museum which was closing. The H-19 and H-34 helicopters are currently being refurbished at the museum and will be on display to the public in June.

Gary Corippo said Estrella Warbirds Museum found out that the Fox Field Museum was going out of business and that they had some equipment that they would make available. “They had the 1951 H-19 and the 1965 H-34 from the Vietnam war years,” he said. “We sent down a recovery team and brought them back to Paso Robles.”

“The helicopters were in pretty good shape and we have started the process to make them look like they were when the Army and the Marines had them,” he said. “Estrella Warbirds Museum member, Tom Gorham, a former army helicopter maintenance man is in charge of refurbishing the two birds and that work is coming along fine…We hope to have both of them ready for display about June 1, 2016.”

Corippo said that while they were down in Palmdale recovering the aircraft, they had the chance to make contact with Will Hearst, who was taking a B-25 from the same Museum. “He said he would help with the expenses involved with the project,” he said. “His uncle was George Hearst, and he flew the H-19 while he was in Korea in 1951…To commemorate his favorite uncle, Will wanted to have a display telling the community about George, so he volunteered his money and interest in the project.” 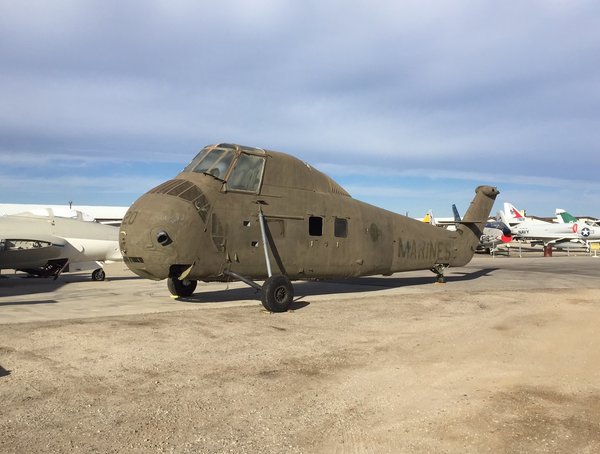 The H-34 Helicopter with landing gear at the Estrella Warbird Museum.

The Estrella Warbirds Museum is an aviation museum located on more than 13 acres of land at the Paso Robles Municipal Airport. The museum is named after the Estrella Army Air Field, which was built in 1943 and eventually became the city’s municipal airport. The focus of the museum is on restoring and preserving military aircraft, memorabilia, and vehicles.

It also has displays of classic racing cars in its Woodland Auto Display exhibit. In addition to many kinds of military aircrafts, the museum’s collection includes battle tanks, anti-tank and anti-aircraft guns, missiles, and much more. The museum hosts many activities such as its annual Warbirds Wings & Wheels event.

The museum is located at 4251 Dry Creek Road, Paso Robles and its hours of operation are Thursday to Sunday 10 a.m. to 4 p.m.