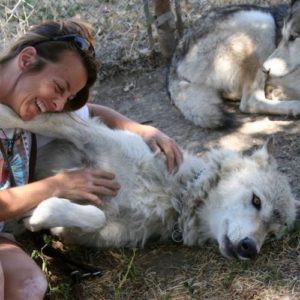 —An incident at the Paso Robles animal rescue facility WHAR Wolf Rescue involving an attack from a Mexican gray wolf on director, CEO and founder Kristi Krutsinger occurred on June 22. Krutsinger was bitten on the lower right leg and required amputation.

The attack happened while Krutsinger was in the cage while the 4-year-old wolf-dog hybrid was eating, not wearing protective shoes. The wolf repeatedly bit her right foot and after removing her shoe to give to the wolf, Krutsinger called for help after the wolf bit her lower leg, according to reports. A volunteer was able to use a shovel to remove the wolf from Krutsingers’ leg and a person with a background in emergency medical technician work was on hand to stop extreme blood loss. Krutsinger is currently in physical therapy recovering from her injuries.

The wolf was euthanized and tested negative for rabies. The attack may have been prompted by a struggle for alpha position in the pack. There have been no public threats or incidents since WHAR Wolf Rescue was started in 1999, according to reports.

WHAR Wolf Rescue and law enforcement agencies are working together to prevent future attacks; the facility’s future operational status is unknown at this time.

Since 2016, Krutsinger has been awaiting a kidney transplant and her GoFundMe campaign has been updated to also help with efforts relating to the attack injuries, such as a wheelchair and van. The GoFundMe page can be found here.