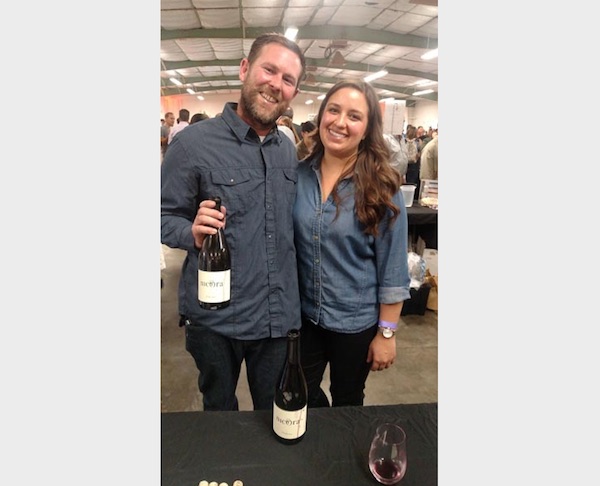 –Nick Elliott arrived in Paso Robles in 2001, when he was 19 years old. He came to work on a construction job, as he says “to see what the world might hold outside my (Central Valley) hometown.”

Four years later, (now working for Scott Hawley, of Torrin Vineyards), Elliott had discovered “what the world held” for him. His “a-ha” moment came, as he relates, “one foggy morning, looking out over a vineyard while driving a tractor, I knew that this was what I loved and wanted to do forever.”

Working literally from the ground (and bottom of the barrel) up, Elliott learned about grapes, vineyards and winemaking from on the job training, being mentored by Hawley. Finally, it was time, and Elliott took the plunge to make and bottle his first vintage.

I was fortunate to meet and taste with Elliott in 2011, prior to his initial release. Nervous, soft-spoken and humble, pouring in the barrel room of Villacana Winery, he was preparing to introduce his 2009 Euphoric (Grenache) and Buxom (Syrah). These two wines received instant praise from both Jeb Dunnuck (Rhone Report) and Doug Wilder (Purely Domestic Wine Report-who has reviewed every Nicora vintage), with scores in the 90’s. In the years following, Elliott’s wines have consistently been awarded impressive reviews from a variety of highly respected industry publications and experts.

Elliott’s first love (besides his wife and daughter) is Syrah, and he strives to bring out the unique expressions from different vineyards, sourcing from Paso Robles down through Santa Barbara County. His work, dedication and love of what he does, has recently been recognized again, this time by receiving “the holy grail” of wine ratings: A 100 point score from Doug Wilder of Purely Domestic Wine Report, for his 2018 Slide Hill single-vineyard Syrah.

He has changed little since I first met him some nine years ago. The nervousness is gone, but he is still soft-spoken and humble, exuding a subtle air of confidence, his eyes sparkling as you talk about what he has accomplished and what is in the future.

Elliott commented on how he felt when hearing about the 100 point score: “I was elated and grateful. While I don’t make wine for scores, it is awesome to be recognized when the wine is exceptional. Winemaking is about crafting something that will show its faults or excellence, depending on how much hard work went into the final product.”

However, the comment that probably describes Elliott the best: “The most satisfying thing for me, is to know I did it my way, with hard work, passion and dedication. Every year presents unique challenges, and you must constantly adapt. Bring it on!”

No doubt there are many years of recognition, and fine wine in the future for this talented winemaker (and for his loyal fans). I have been privileged to take the journey with Nick-and look forward to experiencing his future.

Don Sonderling is a freelance writer covering California’s Wine Country lifestyle and culture, from the Central Coast up through the Napa Valley.