‘The Wizard Of Oz’ coming to performing arts center 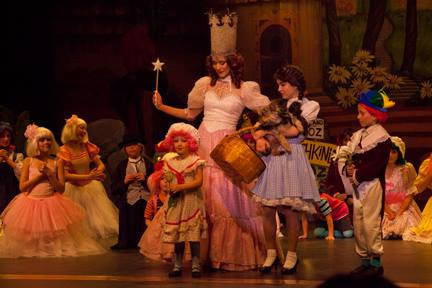 Performances are one weekend only on July 14 & 15

—Follow the yellow brick road to Kelrik Productions’ latest offering, The Wizard Of Oz, to be staged at the Performing Arts Center’s Spanos Theater for one weekend only July 14 and 15, 2018. You will be swept away by our celebration of the iconic 1939 MGM film. The entire family will be captivated as they travel down the yellow brick road and beyond with Dorothy, Toto and their friends, the Cowardly Lion, Tinman and Scarecrow in this lavish production, featuring magical special effects, dazzling choreography and the classic songs you love, including “Over the Rainbow,” “If I Only Had a Brain,” “We’re Off to See the Wizard,” and more.

“This new production of The Wizard Of Oz is my salute to coming “home” to San Luis Obispo for the summer,” said Artistic Director Erik Austin. “The Wizard Of Oz is a perfect experience for the whole family. Filled with magic and surprise, it will delight both Oz enthusiasts and those taking their first trip down the yellow brick road. “ Austin has created a production that leaves sepia-toned nostalgia behind and drops the audience in the middle of the adventure. Through the dramatic use of immersive theater techniques and projections, the audience will find themselves surrounded by a small army of Munchkins, lost in a mysterious forest, and cowering in the presence of Oz himself.

Among the stage, adaptations is the popular 1942 musical that was based on the book and the film using Harold Arlen and E.Y. Harburg’s popular songs. It was commissioned by the St. Louis “Muny” Opera. Kelrik’s production is based on the 1987 version by John Kane who adapted the film’s screenplay for the Royal Shakespeare Company and that, according to Austin, is even more like the film than the Muny version. The Wizard Of Oz will be directed and choreographed by Artistic Director Erik Austin. The creative team also includes Kristina Horeck (Vocal Coaching), Kenmark INC. (Scenic Design), David Beals (Lighting Design), Sophie Latrice (Wig and Hair Design), Joe Ogren (Associate Choreographer).

Tickets for the The Wizard Of Oz are priced from $20 – $60 and may be purchased online at www.kelrikproductions.org or in person at the Performing Arts Center Box Office, 1 Grand Avenue San Luis Obispo, or by phone at (805) 756-4TIX. Children three and older may attend all performances; Regardless of age, all children must have a ticket.