On Tuesday at about 3:55 p.m. Paso Robles police officers located burglary suspect Allison Rae Trammel, 24, and arrested her without incident. This occurred during a traffic stop on Paso Robles Street near 13th Street when a vehicle was stopped for an unrelated traffic violation.

Officers located Trammel as a passenger in this vehicle and she was taken into custody at that time. She was booked into the San Luis Obispo County Jail for one count of burglary and is being held in lieu of a $20,000 bond. 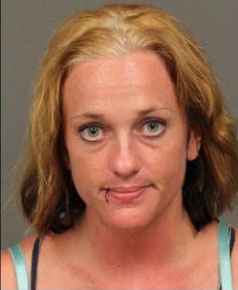 Suspect Allison Rae Trammel, 24, of Atascadero, was booked earlier this month on several charges of possession of narcotics for sales and transportation of illegal narcotics.

Original story Aug. 25, 2014: On Sunday, August 24, 2014 at about 4:35 p.m. the Paso Robles Police Department received a report of the theft of a dog from a pet store in the 700 block of 6th Street. Officers responded and determined that a white female adult had entered the business at approximately 2:40 p.m. and stolen an eleven week old tan and white English bulldog puppy valued at $900.

The suspect’s actions were captured on the business surveillance video. The suspect was observed to take the dog from an enclosure and then conceal the dog under her one piece dress. The suspect walked out of the store without incident and the theft was discovered approximately two hours later.

Police officers conducted follow-up investigation and identified the suspect as 24-year-old Atascadero resident Allison Rae Trammel. Through this investigation, the dog was located and recovered at about 3:50 p.m. Monday afternoon at a residence in the 500 block of Palm Court in Paso Robles. The dog was found to be in good health and was returned to the victim business. 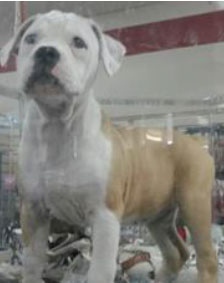 The stolen dog was later recovered.

Trammel is known to frequent the cities of Atascadero and Paso Robles, along with the unincorporated areas of northern SLO County. She is possibly driving a red or maroon colored Kia Optima 4 door passenger car.

This is an ongoing investigation and anyone with information about this case is encouraged to call the Paso Robles Police Department at 805-237-6464. Persons wishing to remain anonymous are encouraged to call Crime Stoppers’ 24-hour hotline at 549-STOP or by texting “SLOTIPS” plus your message” to CRIMES (274637). Photos of the dog and the suspect are attached below. 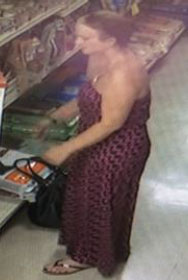 Surveillance video of the suspect at the pet store.