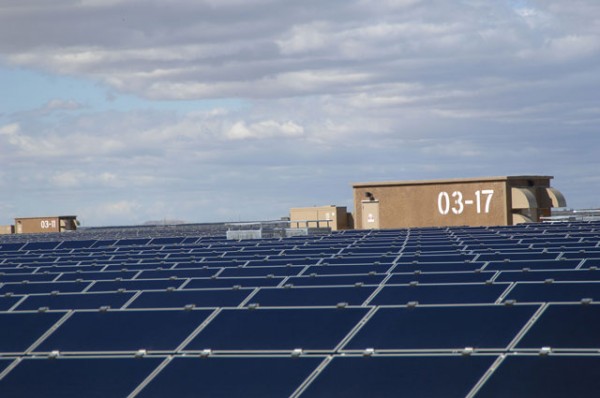 The largest solar plant in the world is now operational in San Luis Obispo County. Located off Highway 58, east of Atascadero near the Carrizo Plain National Monument, Topaz Solar Farm became fully operational in October, though MidAmerican Solar spokeswoman Maria Kelly said that there are some finishing touches to put on the project. MidAmerican Solar oversees construction and operations of the farm and another company, First Solar, is the contractor for construction and operations.

The farm is located on 4,700 acres of private land about halfway between Highway 101 and Interstate 5 in eastern San Luis Obispo County. The project generates 550 megawatts, which ties it for first place among the world’s largest solar power plants. That is enough energy to power approximately 180,000 California homes. Pacific Gas & Electric has a 25-year power purchase agreement, which, according to a fact sheet put out by MidAmerican Solar, will help PG&E meet is goal to get 33 percent of its electricity from renewable energy sources by 2020.

At the peak of construction, there were approximately 800 people employed full-time. With active construction complete, First Solar has 18 full-time employees on-site and Mid America has three. There are also subcontractors employed by Althouse & Meade, a Paso Robles-based biological and environmental services company. According to the Althouse & Meade, the company has spent the last seven years working on the project, managing biological surveys, preparing technical reports, working through different required processes, and coordinating with innumerable contractors and regulators to keep the project compliant on conditions for air quality, noise, transportation, biological and water resources, cultural resources, hazardous materials and more.

According to MidAmerican Solar, the farm generates electricity with no emissions, no waste production and no water use. The panels from First Solar have the smallest carbon footprint of any photovoltaic technology. First Solar worked closely with governmental and environmental groups to “avoid, minimize and mitigate environmental impacts.” Kelly said that there are “all kinds of [animals] living within the project area.” She added that there is a fenced area for the kit foxes, where they can come and go. The project was designed to function as “productive grassland habitat for native plants and animals while being used for passive farming of the suns’ energy.”

The visual impacts, Kelly said, are minimal because there is at least a 500-foot setback from highways and electrical lines have been installed underground within 3,000 feet of the highways. Because the project was constructed on non-prime agricultural land, there is still an opportunity for continued cattle grazing in the area. In addition to the other environmental considerations, the water used during construction was primarily for dust control and during its operation, the panels do not required to be washed. Vegetation in the project will be maintained to help with dust control. During construction, workers were shuttled to and from the site to minimize disruption of the site.