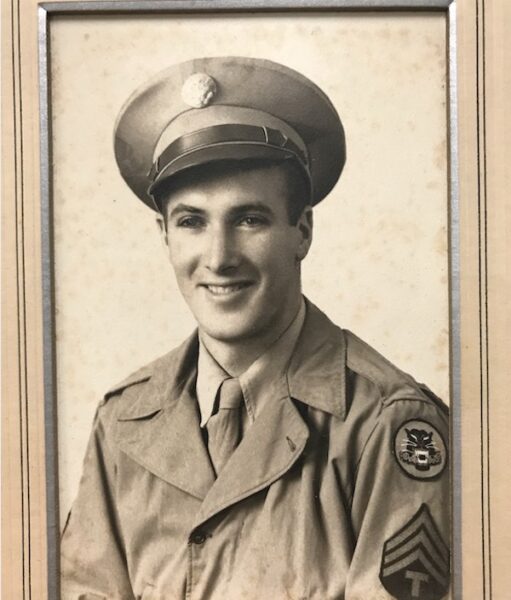 –Earlier this month, Atascadero Police officers responded to the storage unit of an individual suspected to be in possession of stolen property. Upon further investigation, the suspect was arrested. Among the stolen property located at the scene, police officers found a box containing several old photographs and letters written by a soldier who had served in the United States Army during World War II. As the suspect was unable to explain where or when he came in possession of the letters, they were seized for safekeeping.

The letters were of particular interest to Officer Kristian Wood, also a veteran of the U.S. Army. Officer Wood conducted additional investigative research and learned the soldier’s name was John Lucas, Sr. who had served in the 144th Infantry Regiment. The letters had been written between 1940 and 1945 and were sent to his wife Henrietta and son, John Jr., who were living in San Luis Obispo at that time. Officer Wood even found an old Western Union money transfer receipt that indicated that Lucas was sending money home to Henrietta.

With no further information available, Officer Wood turned to the online veteran community. The following day, they provided contact information for a Lawrence Lucas, who was believed to be a son of John and Henrietta and who was living in San Luis Obispo. Officer Wood made contact with Lawrence who confirmed that he was in fact the son of John and Henrietta Lucas and that John Sr., Henrietta, and John, Jr. were all deceased. He was unaware of his father’s letters written during the war. Lawrence then arranged with his sister, Teresa, to meet with Officer Wood in San Luis Obispo. Officer Wood said that the two siblings were amazed to learn the letters existed and had no idea how they left the control of their family.

With recognition and thanks to Officer Kristian Wood for his dedication, diligence, and follow-through, the Atascadero Police Department reports it is happy to have been instrumental in returning these historical family letters and heirlooms to their rightful owners.