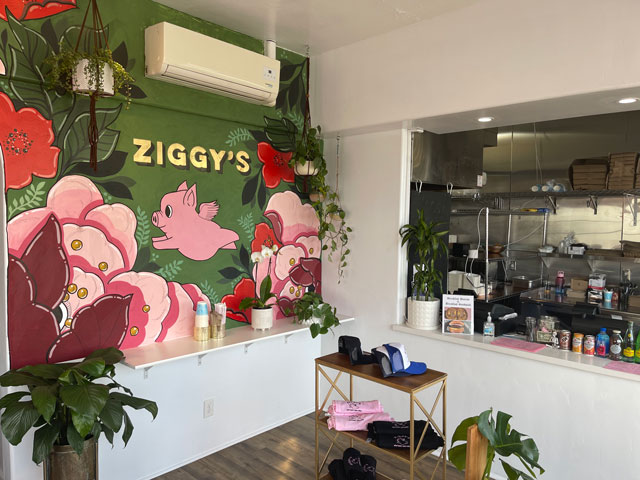 The front counter of Ziggy’s with a lively mural.

– Ziggy’s, a popular vegan restaurant in San Luis Obispo, opened a second location in Paso Robles to ring in the New Year on Jan 1. Located at 1227 Pine Street, the menu features plant-based food and an all-day breakfast menu.

“We chose Paso Robles for a second location because we found there simply weren’t enough plant-based options in town that were fast, fun, and convenient,” says co-owner Matt Martinez.

“When we were presented with the opportunity to serve our food downtown, it was even more of a reason to be here. We are so far beyond thankful for the reception we’ve received.”

“All of the locals and neighboring businesses have been overwhelmingly supportive and we are absolutely humbled. We have met so many great people in just our first week, and the days are just flying by because it’s been so much fun.” 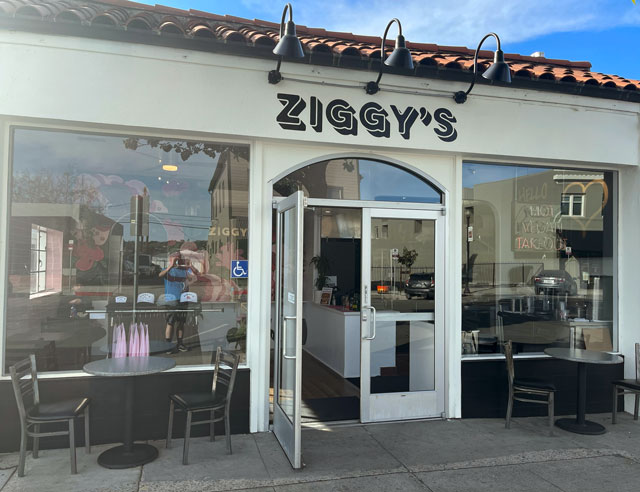 Ziggy’s serves burgers, tacos, salads, fries, and vegan milkshakes along with selections like avocado egg rolls, Korean cauliflower bites, and a breakfast burrito and breakfast sandwich rounding out the menu.

The burger selections feature the “Ziggy patty” made from black beans, pinto beans, carrots, corn, bell peppers, and spices or the “Impossible Burger.” Burger choices range from The Standard with American cheese to some spicy choices such as The Phoenix with charred jalapeños, guacamole, pepper jack, shredded lettuce, chipotle aioli, and the Old 58 with pepper jack, ranch sauce, and BBQ sauce.

The taco choices are just as varied as the burgers and the milkshakes are made with plant-based, dairy-free ice cream from San Luis Obispo’s Scoop the Magic.

Co-owners, Matt Martinez and Brian Englund, met in high school in Morro Bay. Englund owns the Sylvester’s restaurants on the Central Coast and a ramen and sushi restaurant, Kuma, in Los Osos.

When Martinez returned to the Central Coast after 20 years of experience in Orange County restaurants, the two teamed up to open a restaurant “that we wanted to eat at,” said Martinez. With the goal of offering more plant-based dining options for the Central Coast, the team opened Ziggy’s in San Luis Obispo in February 2020.

The Paso Robles Ziggy’s currently has seating for eight but “we expect to add more seating in the coming weeks,” said Martinez.  Ziggy’s is currently serving in-person and takeout orders. Call (805) 221-5999 to place an order. Online ordering for Paso Robles is coming soon.