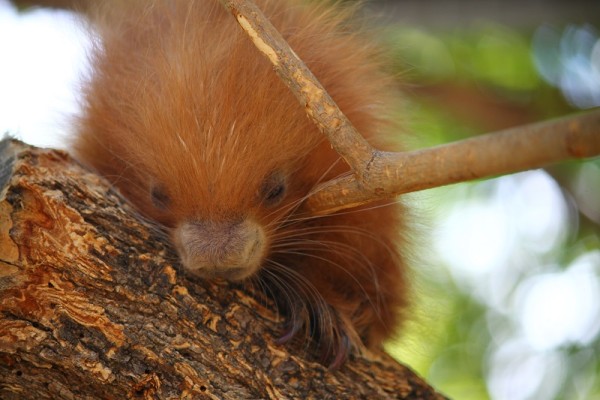 A baby prehensile-tailed porcupine was born at Charles Paddock zoo at the end of June and is now ready to receive visitors. Courtesy photo

– Resembling not much more than little chestnut-colored bean-bag and a ball of cotton, a porcupine and second flamingo chick were born at Atascadero’s Charles Paddock Zoo in recent days.

“This is a really good time for the zoo,” Zoo Director Alan Baker said in an interview. “There are lots of babies being born and many other good things happening here.”

A baby prehensile-tailed porcupine and a second, newly hatched Caribbean flamingo chick were both born at the end of June and are in their habitats for visitors to see.

Though prehensile-tailed porcupines have been at the zoo for more than 15 years, this is the first birth from Ringo who came to the zoo in 2002 and his mate, Marina, who was born in 2011.

The baby is covered with fine, red hair with quills already beginning to harden.

“Almost immediately after the baby porcupine is born, it can climb and move on its own,” Baker said in a press release. “Prehensile-tailed porcupines use their tail for grasping and hanging.”

The Caribbean flamingo chick is the second born at the zoo this spring. 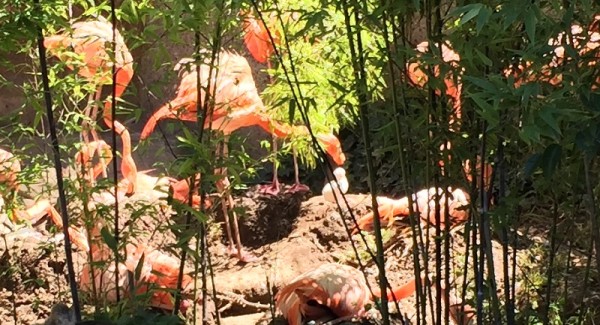 A second flamingo chick was born at Charles Paddock zoo, seen here in the distance as a parent feeds it. Photo by Paula McCambridge

Visitors could be heard “oohing” and “ahing” over the newest flamingo at zoo festivities Saturday. The chick could be viewed being fed by its parent at the rear of its habitat.

The flamingo exhibit has been growing steadily with a new, large exhibit constructed at the front gates of the zoo in 2013, which coincided with the zoo’s acquiring about a dozen more flamingos from the Hollywood Park Raceway.

“In their natural habitat, flamingos tend to breed only when there are large groups of them, so these recent changes at the zoo have now resulted in our second flamingo chick hatchling,” Baker said. “Once flamingos breed, both parents work together to build a nest. A flamingo nest is basically a mound of mud about a foot high where the female lays a single, large egg.”

The chick will have a soft gray plumage and for its first month of life, and its bill will be straight, not curved like an adult’s. After that first month, plumage will begin turning pink.

The pink coloring comes from pigment in the algae, crustaceans, and other invertebrates in their diet.

“We are thrilled to have babies being born at the Charles Paddock Zoo this year,” said Atascadero City Manager Rachelle Rickard. “It’s such a rare opportunity and really speaks to the quality of the zoo when animals start breeding in captivity. Now is a really great time to plan a visit to the zoo; there’s always quite a bit to see, and who wouldn’t want to see our cute new babies before they’re grown?”

For more information about the zoo, go to www.charlespaddockzoo.org.