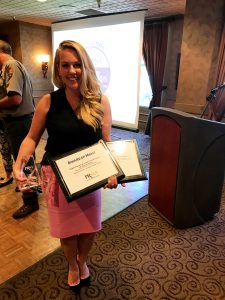 BCA Account Manager Courtney Meznarich was on hand to receive the honors at PRSA’s awards ceremony held in Fresno.

One Award of Excellence was won for news releases prepared for the City of San Luis Obispo outlining how the city intended to respond to the planned closure of the Diablo Canyon Power Plant. The second Award of Excellence was in the Special Events category for budgets over $5,000 for the promotion of Cowparade SLO County, a public art and charity event. The promotion campaign integrated news releases, media coordination, social media strategies and a series of popular videos featuring an adventurous cow participating in fun activities across the county to win more than 100 media placements and statewide attention for the first-ever event.

Two Awards of Merit were awarded for:

“We are especially proud because these campaigns all supported the community we live in,” said BCA’s President and CEO Maggie Cox. “And the campaigns showed our wide range of offerings – from the written word and social media to video, photography and more.”

BCA Account Manager Courtney Meznarich was on hand to receive the honors at PRSA’s awards ceremony held in Fresno. Barnett Cox & Associates is a full-service public relations and marketing firm located in San Luis Obispo, CA. Learn more about BCA on the website and follow BCA on Facebook.