Election results in local State Senate and US Congressional races 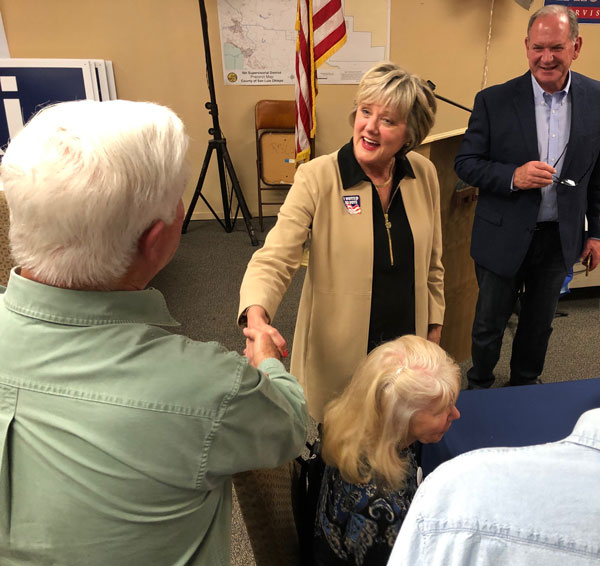 In the race for 17th District California State Senate, Republican Vicki Nohrden of the Monterey Peninsula and Democrat John Laird of Santa Cruz are headed for a run-off in the November General Election. Laird earned 42-percent of the vote, Nohrden 36-percent, with two other Democrats earning the remaining votes, according to the California Secretary of State.

Nohrden attended the Republican Party celebration in Atascadero on Tuesday night to thank the voters of the North County for getting her into the general election. She said, “We drove down from our home in Monterey County to say thank you to San Luis Obispo County. You’re standing with us and we’re standing with you.”

John Laird previously held a cabinet position in Governor Jerry Brown’s administration and was a California State Assemblyman. Nohrden is a businesswoman and previously a youth director at a Presbyterian church in Carmel.

In the 24th Congressional seat race, challenger Andy Caldwell, a Republican, finished a close second to incumbent Salud Carbajal, a Democrat, in San Luis Obispo County voting. Carbajal had 49-percent to Caldwell’s 47-percent in the county. In the full district, which includes all of Santa Barbara County and San Luis Obispo County as well as the Los Padres National Forest in Ventura County, Carbajal earned 52-percent of the vote to Caldwell’s 44-percent, according to the California Secretary of State.

Carbajal and Caldwell will face off in November’s General Election.

Caldwell spent election night at the local Republican headquarters in Atascadero. He said, “I’m running against a career politician, but we have tremendous grassroots support. Doing well in the primary proves to the Republican Party that we’re viable.” He added, “I wish I had an apartment in North County. I’m a resident of the southern end of San Luis Obispo County, but to me, this is God’s Country.”

Carbajal issued a statement following the election results: “This election is pivotal for our Central Coast, state and nation, and I’m grateful to all in our community who made their voices heard at the ballot box, through vote-by-mail and through California’s early voting. It is an honor to serve our 24th Congressional District and stand up for our values in Congress each day. Based on the results we’re seeing, I’m proud that it seems Central Coast residents want me to continue fighting for those values in Congress. I thank everyone for voting and urge our community to keep this momentum up come November.”