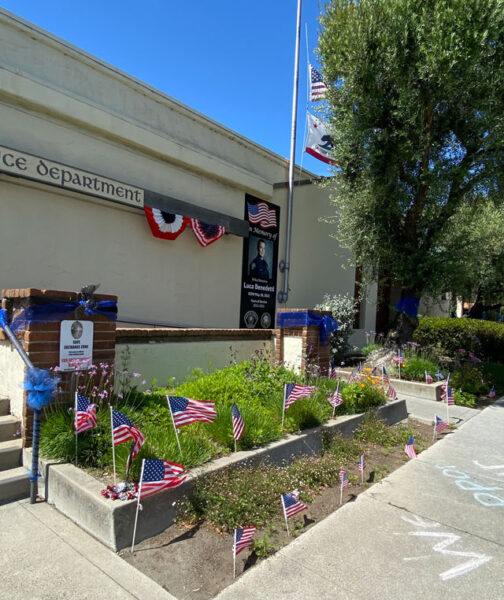 “I’ve participated in decorating our Atascadero Police Department several times in the past year,” Hawkins said. “I drive past the police department every day, and I always make a point to look and make sure all the decorations are holding up securely. Yesterday morning, I was dismayed to see that all of our blue ribbons, blue line flags, and homemade signs of support had been removed.”

“My first thought was that an anti-cop vandal had removed them during the night. I called dispatch and was informed that it was actually the City of Atascadero Public Works Department that had removed everything and stated that per their sign ordinance, decorations supporting our law enforcement are no longer allowed,” she said. 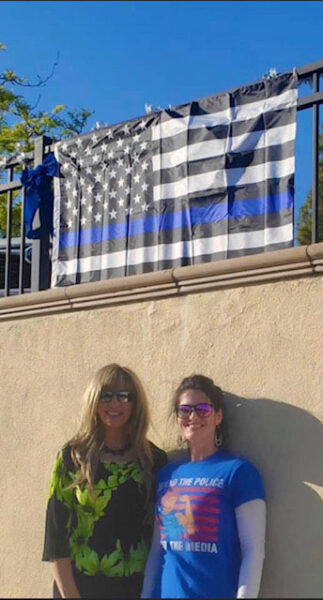 “Our police have been torn down so much over the past year, and I’m just absolutely fed up with the anti-police rhetoric and propaganda, and people in leadership bowing down to these misinformed whiners who demand to control the narrative and take away our freedom.”

Hawkins posted her complaints to Protect Atascadero, a social media group and received hundreds of comments.

Despite the recent removal of the blue ribbons and Blue Line Flags, Hawkins says she and her friends will continue to demonstrate support for the Atascadero Police Officers.

District Attorney Dan Dow recently discussed the Thin Blue Line flag, “It’s not racist. It’s nothing other than saying there’s this thin blue line in our society that’s invisible. The blue represents the police uniform, and there’s a tan line that represents the sheriff’s department and some other colors for the California Highway Patrol and other agencies. It represents this thin invisible line between the criminal element and the rest of our society. That blue line is held by these men and women who are willing to put their lives on the line for ours.”

Last June, Black Lives Matters supporters marched through downtown Paso Robles to protest the death of George Floyd and alleged violence by police officers. Paso Robles Mayor Steve Martin marched with them for a while and told the protesters he would see to it that the issue of police violence was discussed publicly in the city. The protesters marched through downtown Paso Robles between the Downtown City Park and the U.S. Post Office for several hours. At times, some of them swore at police officers and called them profane names.

Some residents are baffled why protesters screaming insults at police is protected by free speech laws, but not benign displays of support for police.

In Portland, Oregon, Mayor Ted Wheeler joined protesters who burned and looted parts of downtown Portland to show his support for their cause. Later, protesters went to his home and set on fire his condo complex in an attempt to burn it down. Mayor Wheeler and his family moved to an undisclosed location.