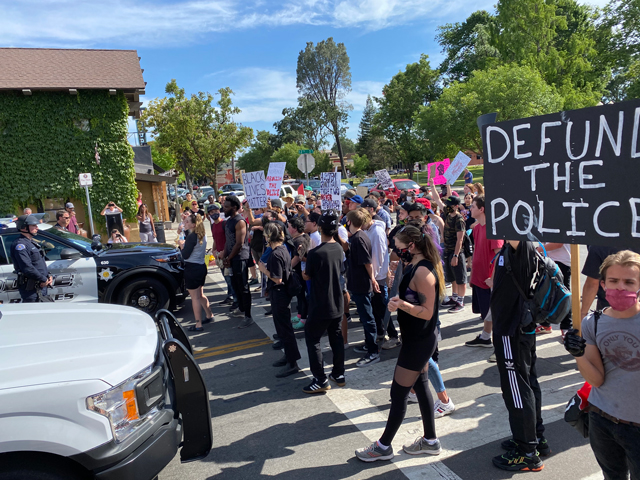 –A Black Lives Matter protest and march closed streets in downtown Paso Robles on Tuesday. The protest was peaceful and included about 100 to 125 people, according to a statement from the City of Paso Robles.

Unlike a similar peaceful protest in the park on Sunday, Tuesday’s protest drew a large law enforcement response with dozens of officers stationed around town, as protesters walked through the middle of the streets.

It caused traffic delays and road closures in the downtown area as protesters marched and then sat down in intersections from the US Post Office on 6th Street to Pine Street and 12th Street. Police barricades were placed in areas to keep protesters from overtaking Highway 101, as occurred in San Luis Obispo on Monday.

The protest started at Downtown City Park at 11 a.m. The crowd then moved to the Paso Robles Police Department, where Mayor Steve Martin addressed the crowd. The protest marched on 6th Street, Spring Street, Pine Street, 12th Street, and around the park.

By 4 p.m. much of the crowd had left, but some stayed for a heated vocal confrontation with police at Pine and 12th streets, where Police Chief Ty Lewis and City Councilman Steve Gregory met and talked with protesters. Chief Lewis urged the protesters to disperse.

The march ended with a unifying prayer led by two of the protesters alongside Paso Robles Police Chief, Ty Lewis. Chief Lewis stated that “the peaceful end to the protest spoke to the soul of our community. Everyone’s voice was heard, and we were able to keep everyone safe today.”

“City leaders acknowledge the issues raised by the protesters and seek to be an ally in the fight against racial injustice,” the city’s statement said. “The City of Paso Robles fully embraces the rights of protesters to peaceably assemble and is grateful for the outcome of today’s events.” 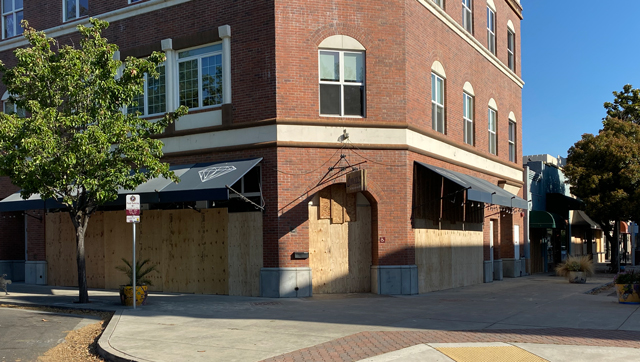 A few businesses board up windows

Following Tuesday’s protest in downtown Paso Robles, a few businesses took precautions and used plywood to board up their windows. Boards were covering the windows of Siegel’s Jewelers, Yanagi’s restaurant, Pine Street Saloon, and a couple of other storefronts.