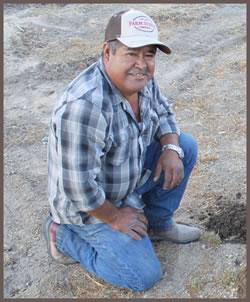 A jury found Travis Woolf Sergio Aranda not guilty of voluntary manslaughter and assault charges in the death of Alvaro Medrano, pictured above. Photo from Facebook.

–A jury found Travis Woolf, 37, of San Miguel and Sergio Aranda, 36, of Salinas not guilty of voluntary manslaughter and assault charges in the death of Alvaro Medrano, 54, a former La Vista Vineyards manager who suffered fatal brain injuries in a fight that occurred outside the Elkhorn Bar in September of 2014, according to reports.

Aranda and Woolf were correctional guards at Salinas Valley State Prison at the time of the fight, but have since been reportedly terminated. Both men had pleaded not guilty. If found guilty, the two men would have faced a maximum sentence of 11 years to life.

The Facebook page, Justice for Alvaro, posted an announcement of the verdict along with the following statement:

We are deeply saddened to share that, today, the jury returned a verdict of not guilty on all charges against the former prison guards charged with manslaughter and battery in Alvaro’s death. As friends of Alvaro, we are all completely shocked and disappointed in the verdict, which was as tragic and senseless as Alvaro’s death given the circumstances and evidence in the case. Alvaro was an amazing father, husband, grandpa, and friend who touched thousands of lives in so many positive ways. He was the most kind, compassionate, selfless person we had ever met.

The family would like to thank everyone who has supported them including family, friends, and colleagues and the San Luis Obispo Sheriff’s Department and Deputy District Attorney Craig Van Rooyen for their commitment and tireless efforts in the case. Our hearts, thoughts and prayers go out to Alvaro and his family today. We ask that that you all continue to support Alvaro’s family during this continued difficult time.

Jury selection is slated to begin May 3

–San Luis Obispo Superior Court Judge John Trice once again ruled that former prison guards Sergio Aranda, 35, of Salinas and Travis Woolf, 36, of San Miguel will stand trial for voluntary manslaughter. They were charged in late 2014 with killing Alvaro Jaramillo Medrano, 54, of San Miguel during a fight at the Elkhorn Bar in San Miguel on Sept. 7.

At the time of the incident, Aranda and Woolf were employed as correctional officers at Salinas Valley State Prison in Monterey County. They were let go in 2015, according to a report in the Tribune.

Attorneys for the defendants asked for the charges to be dismissed in November 2014. At that time, Trice ruled that the guards would stand trial. Aranda’s attorney, Gerald Carrasco, filed a motion in January. He wrote that wasn’t until December 2015 that a witness, David Duckworth, who claimed to see the fight from down the road had been interviewed by Sheriff’s detectives.

According to the report, Duckworth said he was a friend of Medrano’s and was interviewed two days after Medrano died. The interview of Duckworth was misfiled by Detective Hussein Abbas and the defense was not made aware of the witness or the video. Carrasco said that the witness’ testimony was vital to his defense. Woolf’s attorney, Ilan Funke-Bilu, also filed a similar motion for Woolf in February.  Duckworth died in July 2015, rendering defense attorneys unable to interview the witness.

Trice agreed that the evidence was misfiled and should have been provided to the defense in 2014, he added that the misplacing of the video was not done intentionally, according to the report. Further, he said that the witness’ interview was confusing and appears to favor the prosecution rather than help the defense.

Numerous letters vouching for Woolf’s character were submitted to Trice. Medrano’s family created a Facebook page, Justice for Alvaro, and includes updates on the case.

Selection of the jury is scheduled to start Tuesday, May 3. Once selected, the trial will likely last about three weeks.