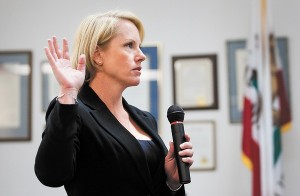 SACRAMENTO – Governor Jerry Brown Thursday announced the appointment of Caren Ray, 45, of Arroyo Grande, to San Luis Obispo County Board of Supervisors. She will represent the fourth district in south county. She fills the seat of Paul Teixeira, who died of a heart attack in June.

The decision could effect the debate over the Paso Robles groundwater basin emergency ordinance that is set to expire Oct. 11. County supervisors failed to extend the initial 45-day moratorium on new vineyard plantings earlier this week, by just one vote. An emergency ordinance requires the support of four out of five supervisors.

The board is revisiting the issue next Tuesday. Ray has perviously indicated support for the emergency groundwater ordinance, according to reports.

Ray has been a member of the Arroyo Grande City Council since 2010 and a teacher at Santa Maria High School since 2007. She served on the City of Arroyo Grande Planning Commission from 2005 to 2010 and was owner of the Game Room from 2002 to 2006.

Ray was a teacher at Santa Maria High School from 1993 to 2000. She earned a Master of Arts degree in educational leadership from California Polytechnic State University, San Luis Obispo. This position does not require Senate confirmation and the compensation is $82,014. Ray is a Democrat.

Delve a little deeper into the water basin issue