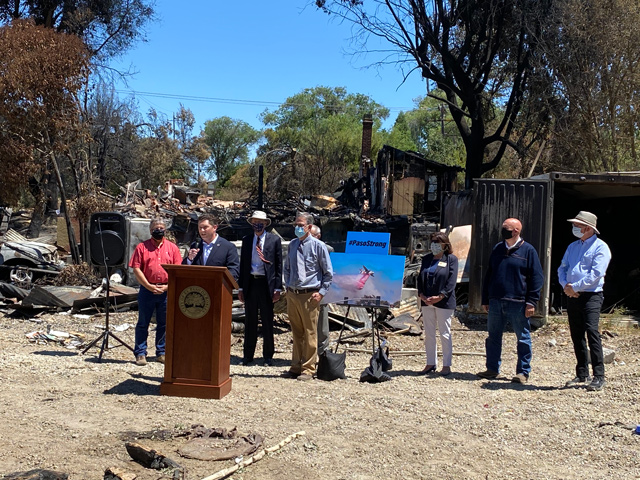 Assemblyman Jordan Cunningham speaking at a press conference on Creston Road near a home destroyed by the River Fire.

–North County leaders held a press conference Thursday morning to discuss what can be done to reduce the risk of riverbed fires. The leaders gathered next to a Paso Robles home that burned down this week in the River Fire.

Assemblyman Jordan Cunningham said he is sending a letter to the California Environmental Protection Agency (CalEPA) asking for permission to use mechanized methods to clear brush in the riverbed.

Looking at the destroyed home on 410 Creston Road, San Luis Obispo County Supervisors John Peschong said, ‘It’s a preventable tragedy. Over the past three years, there have been over 450 fires in the Salinas riverbed in Paso Robles. With early management of brush and weeds in the riverbeds, this could have been prevented.”

The state will not allow mechanized methods or clearing of the riverbed before June 22, he said.  Whereas he and all local homeowners are required to remove the brush around properties by May 1. 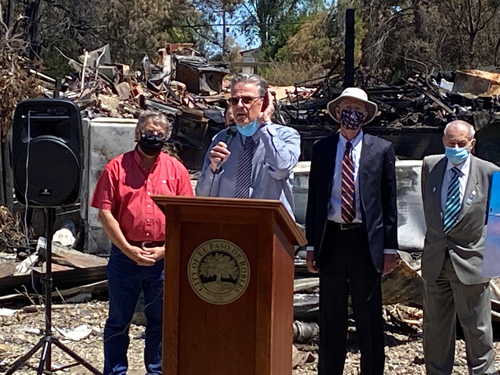 ‘This fire was so close to being out of control and burning down 100 homes,’ city councilman says

Peschong and Martin signed Cunningham’s letter to the Secretary of the California EPA. It asks the Central Coast Regional Water Board to take the following actions in seven days:

The letter is on its way to the California EPA. It’s the hope of the local leaders that the letter and public pressure will inspire the regional water board and EPA to take action.

The disagreement between the water board and the city has been ongoing, says Paso Robles City Councilman Steve Gregory. “We want to go in the riverbed and clear it year-round,” he said. But the water board won’t permit it until the end of June, and then only by hand-clearing, he said. Last year the city spent $400,000 clearing the riverbed, but was only able to clear 15-percent of the debris, he said.

“This fire was so close to being out of control and burning down 100 homes,” Gregory said. “It is ridiculous that we cant clear the river.” There have been 45 fires in the riverbed just this year, he said.

Paso Robles City Councilman John Hamon says, “The root cause is the homeless living in the riverbed and our inability to legally remove them. Staff is pulling together information for the council to consider in a special meeting what actions we can take from this resulting lack of cooperation from regional water quality.”

“In my opinion, we should send them a bill for all costs and damages and bring it to court if they refuse to pay,” Hamon said. “They need to be held accountable for the refusal to allow our city to mitigate a very real-life safety hazard to our Roblans from people who should not even be in the riverbed and them starting fires in an extremely high fuel loaded environment.”

Matthew T. Keeling, the executive officer of the Central Coast Regional Water Quality Control Board issued the following response to the comments by local leaders:

Protecting public health and safety is a priority for the Central Coast Water Board and we have been and continue to be committed to working with the city to address the significant fire problem in the riverbed.

The elected officials’ statements are not consistent with our ongoing coordination with city staff since last summer. Thus far, we’ve allowed the city to do everything they’ve asked for and have been working with them since last year to get a long-term plan and permit in place to do the work they are saying we are not allowing them to implement.

The Water Board and city staff have been working on this issue since the fires last summer. This is when the city first reached out to us about the need to remove vegetation for fire suppression; this has not been going on for years as stated in Assemblymember Cunningham’s letter.

In response to the river channel fires last summer and the city’s declared emergency, we allowed the city to remove vegetation in strategic areas to act as fire breaks to mitigate additional fires and have allowed them to maintain these fire breaks.

Following these “emergency” activities last summer we asked the city to prepare and submit a long-term plan for our review and approval so a permit could be in place to implement fuel reduction work prior to subsequent fire seasons. We provided them with the information they needed to prepare this plan and have had numerous meetings with them regarding the preparation of the plan.

Mechanized removal of vegetation will be allowable under such a plan with appropriate controls to protect water quality. We anticipated the city’s plan earlier this year but have yet to receive it for our review and approval. City staff now say it will be submitted sometime in July. The permitted plan would have allowed them to implement more comprehensive and ongoing actions starting this spring instead of having to respond to future emergencies like the most recent fire this Monday.

We anticipate another emergency plan from the city in the next day or so and will very likely allow them to do this work again without a permit with the hope that they finally submit a long-term plan to us for our approval so we are not in this same situation next spring and summer, like we are again now.

We will continue working diligently with the city to address this significant issue.