Brian Rodriguez, 26, was sentenced yesterday to 31 years and 8 months in state prison by Superior Court Judge Rita Federman for the attempted murder of the mother of his child while she was pregnant, and other crimes, the San Luis Obispo District Attorney’s office reports. Rodriguez had been convicted by a San Luis Obispo jury in October of this year. 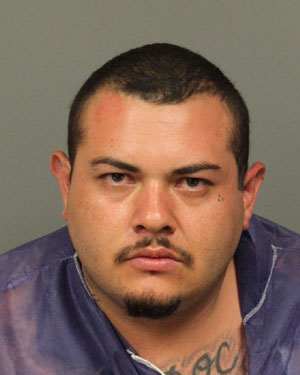 Among the other charges were three counts of child endangerment because children were present and witnessed the attack. When an adult male came to the victim’s aid, Rodriguez threatened to injure that man, and also threatened to injure him if he reported what he saw to law enforcement, the district attorney reports. Included in the charges were counts based on several earlier incidents of violence committed by Rodriguez on the victim. On five separate occasions he stabbed her, maiming her on two of those occasions.

San Luis Obispo County deputies were dispatched early on the morning of July 27, 2014, to the 6200 block of Green Valley Road, a section of Highway 46 west about halfway between Paso Robles and Cambria, on the report of a female who was being stabbed by a male subject.

Deputies responded to the location and arrested Rodriguez who had stabbed his pregnant common law wife several times causing serious injury to the victim, according to a sheriff’s report.

Rodriguez, who was on parole, was arrested for premeditated attempted homicide and booked into San Luis Obispo County Jail with his bail set at one million dollars at the time.

The victim was transported to the hospital with serious but non life threatening injuries. There were several children present at the residence when the attack took place.