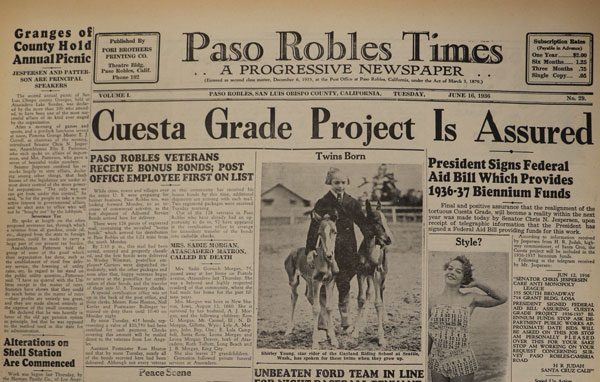 Final and positive assurance that the realignment of the tortuous Cuesta Grade will become a reality within the next year was made today by Senator Chris N. Jespersen, upon receipt of telegraphic information that the President has signed a Federal Aid Bill providing funds for this work.

According to information received by Jespersen from H.R. Judah, highway commissioner, of Santa Cruz, the Cuesta project will be included in the 1936-1937 biennium funds.

Following is the telegram received by Mr. Jesspersen: 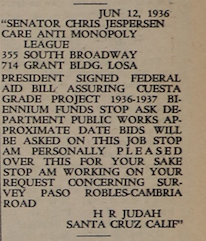 Although it is impossible to say at the present time, as to the exact date when bids for the work will be let, or when the actual reconstruction will be started, Senator Jespersen declared Monday that he is making every effort to speed up this action, and that results can be expected probably before the close of the summer.

The Cuesta Grade improvement has been the major goal of civic leaders, service clubs and other organizations through the county. Nearly a year ago as an association of businessmen was formed, for the purpose of waging an active campaign to bring the realignment project to a head.

Several meetings were held in this county and a canvass of the territory from San Luis Obispo north as far as San Jose was made by Wm. Kullgren of Atascadero. This brought considerable enthusiasm from newspapers and businessmen as far as 200 miles north of the bottle-neck grade and is believed to at least partially responsible for the final approval.

Following this, the California State Chamber of Commerce named the Cuesta Grade its “number one” project for improvement and recommended immediate action.

The new route has already been surveyed, preliminary to the actual widening, and a fast four-lane highway is planned. According to engineering reports, the maximum grade will be increased from 6 ½ to 7 per cent. This would not slow down traffic, it is explained, because the average car would be able to travel at 50 miles per hour on a straight sever per cent grade.

The summit of the present grade will be lowered 50 feet, and the northern approach will be straightened by means of a huge fill in the vicinity of the railroad tunnel entrance.

The cost of the project is estimated at approximately $650,000.

In his telegram to Senator Jesperson, Judah also declared that he is working for a survey of the Paso Robles-Cambria road, a much desired route which would provide a highly scenic gateway from the valley to the coast.