Paso Robles News|Thursday, January 20, 2022
You are here: Home » Community » Looking Back: The Lost is Found—the adventures of Oliver Olsen

Looking Back: The Lost is Found—the adventures of Oliver Olsen 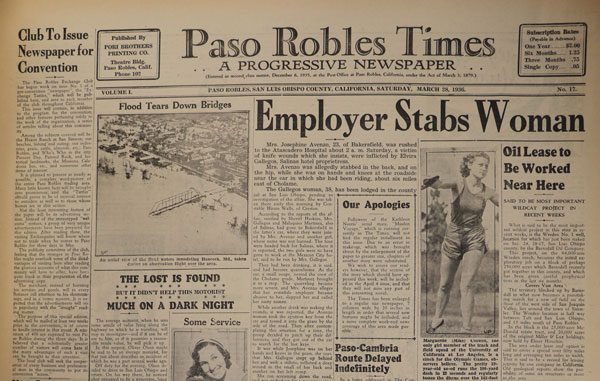 The average motorist, when he sees some article of value lying along the highway on which he is traveling, will stop to investigate—and if it can be of use to him, or if it possesses a reasonable resale value, he will pick it up.

In this respect, Oliver Olsen might be said to be an average motorist, for that just about describes an incident which he was part several weeks ago.

Off duty for the evening, Olsen decided to drive to San Luis Obispo and return. On his way there he noticed what appeared to be a generator lying by the side of the road. The one in his car was apparently functioning perfectly, but one never could tell. Beside, the thing had a substantial market value; he picked it up, took it home, and temporarily forgot the matter.

A day or so later, it being necessary for him to make a hurried trip to Los Angeles, Olsen borrowed his brother’s newer car, headed for the south via Bakersfield.

It is a long way between settlements on the Bakersfield route, and a lonesome road at night. Motor trouble can be very inconvenient. It was on one of these long stretches that Olsen found his lights growing dim, the reaction of his motor fuel and spark becoming feebler and feebler, until the whole thing “conked out.”

Yes, his batteries were dead. There was no generator in the car! A long walk, an ingenious mechanic, and some hard-earned cash combined to make possible the installation of a misfit, second-hand generator, and the balance of the round trip was completed without further mishap.

On his return, Olsen discovered that his brother had preceded him to San Luis Obispo on that evening several days before; and that generator he had picked up was identically the one made for his brother’s car.

He tightens all bolts and nuts on his own machine at regular intervals, now.