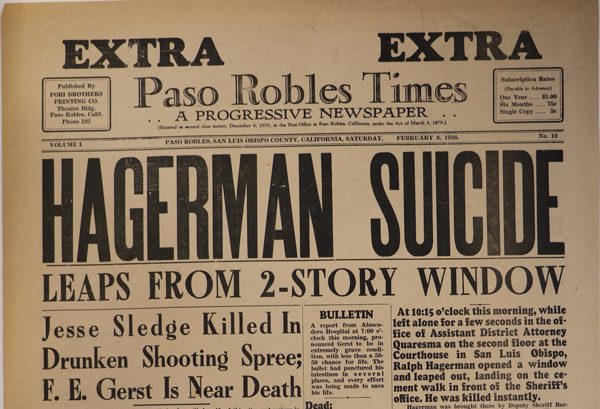 Click here to read the full front page of the Saturday, February 8, 1936, Extra Edition of the Paso Robles Times

“A drunken row, which ended in death for Jesse Sledge, 45, of this city, and serious injuries to two others, came to a climax about 6:30 last night at the home of Freitas Gerst, on Chestnut street, near 16th. “

Sledge died from his wounds at Atascadero Hospital. Gerst, 48 and Earl Pickering, were wounded but survived. The shooting was witnessed by Betty June Sledge, the 10-year-old daughter of Jesse Sledge.

Witness accounts allege that Ralph Hagerman, 32, began shooting after an argument broke out and Sledge was fatally shot while attempting to wrestle the gun away from Hagerman. Hagerman’s account is that Sledge had stolen Hagerman’s pistol and shot Gerst and Pickering then himself.

Saturday morning, Feb 8, Hagerman, arrested for the fatal shooting of Sledge, leaped to his death from the second story window of the San Luis Obispo County Courthouse, where he was awaiting questioning by District Attorney M.R. Van Wormer.