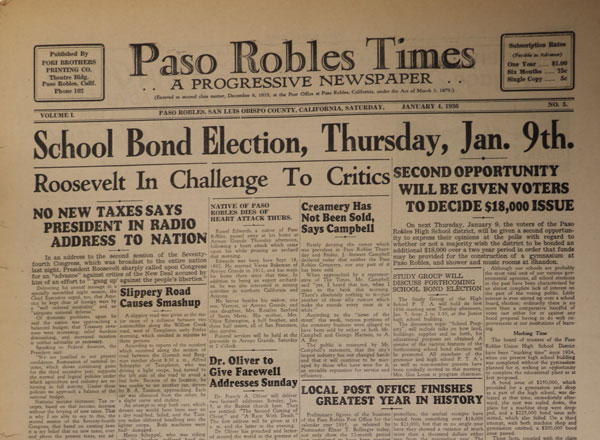 Preliminary figures of the business of the Paso Robles Post Office for the calendar year 1935, as released by Postmaster Elmer T. Bollinger today, not only show the 12-month period just completed have been greatest in the history of the local office, but that the percentage of gain itself was the largest on record here.

The increase is accounted for mainly in stamps sold, although slight gains in “second, third and Fourth class” as well as “miscellaneous” activities was recorded.

It is interesting to note that since `1927, when this summary was begun as a part of the records at the local post office, the annual receipts have varied from something over $18,000 to $21,000, but that in no single year have they showed a variance of much more than a thousand dollars either way from the preceding year. The 1935 gain of $2,944.30, thus might well be said to be an outstanding event in the history of the office, and to mark a decided up-trend in the prosperity of the community.

“I know of no other cause than better business conditions, more money in circulation generally, for this great gain,” Bollinger said.

“All of us here would like to express our appreciation to the public, for the co-operation they have given us, and for the patience which they showed during the Christmas rush which ended last week. We hope that 1936 will prove to be an even greater year.”

The complete reports covering all of the post office activities will be available by the first of next week, Bollinger said.