Looking Back: Personality of the week Giff Sobey cares little for recognition 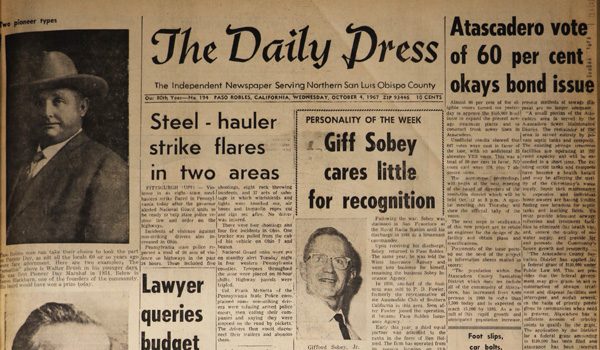 Click here to see the full front page of the October 4, 1967, The Daily Press.

A keen business mind, coupled with a quick dry sense of humor and a devotion to his community, all share in making up a man who is receiving a deserved pat on the back this week, selected as the Chamber of Commerce “Personality of the Week.”

Gifford L. Sobey Jr., although he will shun the credit and back out of the limelight, has shared in much of the success and warmth of Paso Robles, through his own feelings and contributions to the town.

“When I do something, it’s not for publicity or recognition, it’s because I want to do it, for myself and for who or what I’m doing it for,” Sobey says.

Sobey was born in San Francisco, the son of Dr. Giff Sobey and his wife, an almost-native North County resident, who grew up in Indian Valley. As a young man, in 1915 Sobey came to Paso Robles where his father set up his practice as a general practitioner. His father, although no longer still an active doctor, still is an important member of the community.

Following high school graduation, young Sobey left Paso Robles to attend the University of Oregon. He studied there for two years, followed by one year at Cal Poly, and his final year back at Oregon. He was graduated with a bachelor of arts degree in pre-med.

A year of postgraduate study was taken at Fresno State College before Sobey returned to Paso Robles. He went into the insurance business as an independent agent until World War II.

Enlisting in March 1942, in the U.S. Navy, Sobey received his commission as a lieutenant j.g. In October of the same year, He served 23 months in the Pacific attached to a mobile communications unit. His unit traveled throughout the Pacific war arena and saw a good deal of action.

Following the war, Sobey was, stationed in San Francisco at the Naval Radio Station until his discharge in 1946 as a lieutenant commander.

Upon receiving his discharge, Sobey returned to Paso Robles. The same year, he was sold the Wiest Insurance Agency and went into business for himself, renaming the business Sobey Insurance Agency.

In 1950, one-half of the business was sold to P.D. Fowler, formerly the representative of the Automobile Club of Southern California in this area. Soon after Fowler joined the operation, it became Paso Robles Insurance Agency.

Early this year, a third equal partner was admitted to the ranks in the form of Ben Holsted. The firm has operated from its present location on 12th Street for 16 years. The small office is an active, productive and busy one.

Sobey married the former Barbara Luther, a native of Paso Robles. The family is complete with four children and one grandchild. Claudia, the oldest child, is now Mrs. John Craspay of Paso Robles and is the mother of a baby girl, Barrie. Daniel, 19, is in the Coast Guard stationed in New York. Timothy O, active in Future Farmers of America and playing football, is 16 and a student at Paso Robles High School, and Kathryn is the youngest child at 12. She attends Glen Speck School and is a member of the Roblettes Swim Team.

Besides Sobey’s father and both his wife’s parents, the Sobey family is represented in Paso Robles by Mrs. Jeanne Sudden, Sobey’s sister. His other sisters are Mrs. Katherine Walling of Morro Bay and Mrs. Elizabeth Frye of Sierra Madre.

Besides his business, Sobey has several organizations, which keep him quite active. He is a member of the Masonic Lodge and the Shrine Club of Paso Robles, serves on the board of directors of the Rotary Club, the County Property Owner’s Association, and the Las Tablas Soil Conservation District. He is also a member of the Chamber of Commerce as well as being a past director, and has served in past years on the recreation commission and the Pioneer Day Committee.

What little time remains in this busy man’s life is spent with his hobbies, which include dry-fly fishing for trout and amateur radio. He has also been keeping a close watch on a 20-acre irrigated walnut orchard in the Oak Flat area, which yielded its first crop last year of over 500 pounds.