Upon the prettily decorated stage of the Assembly Hall seven more young people were graduated from the Paso Robles High School.

The class colors, gold and white, were conspicuous in the stage decorations. The young ladies were dressed in handsome white dresses and with the somber hue of their brother classmates and the bowers of flowers and evergreens about the stage a pretty scene was presented to the large audience assembled to listen to the graduating exercise. The occasion marks the ninth annual commencement of the high school.

Following are the members of the graduating class of ’04: 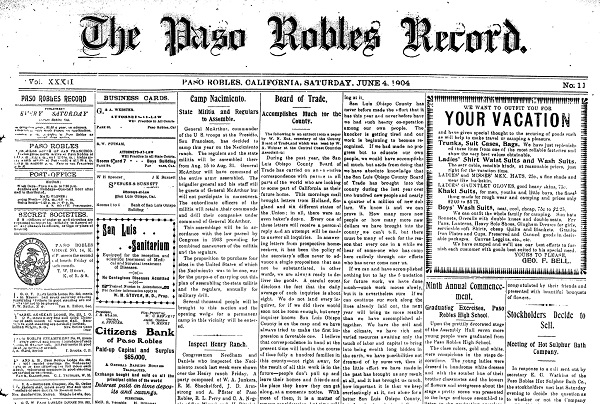 The scheme of decorating was well carried out. Over a large flag were draped ropes of green, in which were intertwined golden poppies. The back of the stage was covered with gracefully twined greens and flowers and in front banks of green were arrayed. Rustic seats completed an exquisite garden scene. The class pennant was conspicuously  hung on the side of the hall.

The program commenced with an invocation by Rev. Geo. B Cliff, following which Miss Woods sang in good voice a solo and responded to an encore. Tony and Wallings’ Orchestra played an overture. Miss Edna Gibson delivered the salutatory in a good full voice and Mr. and Miss Kelshaw sang a duet.

The class history, will and prophecy were delivered by Miss Minerva Monteith in an excellent manner and called forth loud applause.

The orchestra rendered a selection which was followed by the valedictory by Miss Mabel McCord which like the other addresses the class was well received.

Mr. Hensey, in eloquent and well chosen English, delivered an address on an educational theme.

Mrs. Anna Randolph Silsby sang “Farwell” and to an encore responded with a beautiful selection from “Cavaliera Rusticana.” Mr. R.M. Shackelford addressed the class with words of advice and handed each his diploma that had been earned by four years of hard study.

At the closing graduates were congratulated by their friends and presented with beautiful bouquets of flowers.

State militia and regulars to assemble at Camp Nacimiento

This assemblage will be in accordance with the law passed by Congress in 1903 providing for combined maneuvers of the militia and the regulars.

The proposition to purchase four sites in the United States of which the Nacimiento was to be one, was for the purpose of carrying out this plan of assembling the state militia and the regulars, annually for military drill.

Several thousand people will be brought to this section and the opening wedge for a permanent camp in this vicinity will be entered.