Paso Robles News|Wednesday, December 7, 2022
You are here: Home » Community » Looking Back to 1931: Fatal accident results in lawsuit, man to parachute into town

Looking Back to 1931: Fatal accident results in lawsuit, man to parachute into town

Excerpts from Wednesday, May 12, 1931, The Paso Robles Spotlight:

Parent of Iris Woolman to act for other folk

A statement that he “will institute suit to collect damages to the fullest extent of the law” was made here today by Lou Woolman, father of Iris Woolman, 20-year-old crash victim who up until Saturday morning was considered at death’s door following the Bakersfield highway auto crash which caused the death of Lillian Olsen, 17, popular Paso Robles girl.

Not bitter but seeks protection

“It is my intention to prosecute young Sturgeon to the limit of the law,” Woolman declared. “I have no bitterness in my heart for the youngster whose driving caused the death of one young girl in full bloom of life, and injured another sufficiently to cause the most intense anguish of mind pending conflicting opinions of her recovery.” 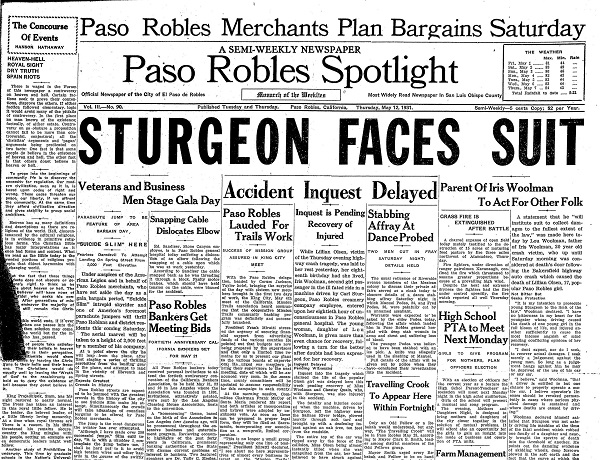 I don’t expect, nor do I seek, to recover actual damages. I seek merely a judgment against the young man. So long as a judgment hangs against him he may be deprived of the use of his car or any car.”

“I believe,” said Woolman, “that a driver is entitled to but one chance to properly operate a motor car. I believe operator’s licenses should be revoked permanently in cases where serious physical damage is sustained and where deaths are caused by driving.”

Woolman declared himself satisfied that Sturgeon was not safely driving his machine at the time of the fatal accident which robbed one family of a daughter and nearly brought the spectre of death into the threshold of another. He points out the damming evidence of skidding wheels, deep furrows plowed in the soft earth and the fact that the curve at which the accident occurred is safely negotiated at 30 miles per hour. He takes the stand that the death machine was traveling in excess of a speed normally safe for the curve. Although the speed feature of the case may never be proved since there were no eye witnesses to the crash the physical evidence, condition of the ground near the scene and other factors, tend to show that the car was being rapidly driven.

Example for others and parents; averse

“In prosecuting Sturgeon, it is with other parents, other girls and boys in mind,” Woolman said. “I believe that a man who has driven one person to his or her death has no place behind the wheel of a motorcar. In forcing his permanent revocation of right to drive I am sure, so far as he is concerned, one more menace to life and property has been removed. I am doing it for other parents, other daughters, other sons. My own is safe now. I propose to aid in making safe the lives of other young women.”

Woolman plans to make his suit a test to apply generally, if possible.

Under auspices of the American Legion and in behalf of Paso Robles merchants, who have set aside the day as gala bargain period, “Suicide Slim” intrepid skyrider and one of America’s foremost parachute jumpers will thrill Paso Roblans and district residents this coming Saturday.

The aerial marvel will be taken to a height of 2000 feet by a member of his company.

At a point above the city he will leap from the plane, after first staging a series of thrilling acrobatics from the landing gear of the plan, and attempt to land in the vicinity of Eleventh and Spring streets.

Paso Robles streets are expected to be jammed with the greatest crowds in the history of the city to see Suicide Slim make his attempt. Simultaneously the crowds will take advantage of countless bargains to be offered by Paso Robles merchants.

The jump is the most dangerous the aviator has ever attempted.

“Although I have made over 200 successful jumps,” Slim said today, “it is with a shudder I contemplate the jump before me. I shall be hard put to it to avoid high tension wires and other hazards in the course of the swiftly dropping chute.”

Editorial summary: Prizes were offered to members of the crowd, donated either by Slim or by the downtown merchants who prepared their shelves with attractive bargains. The prizes will be handed out personally by Slim. Merchants hope that “crowds will be thronging store aisles in quest of bargains.”