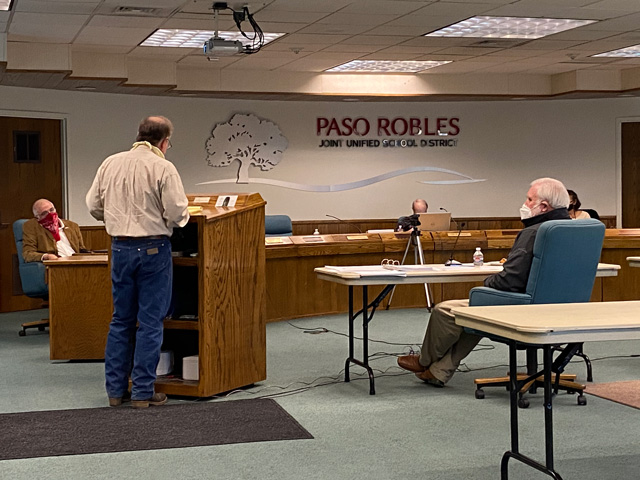 –The Paso Robles Joint Unified School Board held a special meeting on Saturday to discuss the recent San Luis Obispo County Grand Jury report, entitled, “Paso Robles School District: A Cautionary Tale.” The grand jury says the 28-page report “provides a detailed illustration of how a school district can inadvertently fail its students and the community it serves.” It blames the school district’s financial problems on poor leadership.

The report has three chapters: School District Leadership; District Reserve Management; and The Aquatics Complex. On Saturday, the school board trustees and administrators spent more than five hours discussing the report, point by point. The board discussed findings by the grand jury and decided whether or not they agreed with them. In nearly every case, the board agreed with the grand jury’s findings.

The trustees discussed hiring practices and allegations of cronyism, nepotism, and conflicts of interest by former Superintendent Chris Williams and his staff. Trustee Tim Gearhart said the district lost many good teachers because of the working conditions in the PRJUSD school district. He said there was a hostile work environment created by the former superintendent and his staff; and that it caused some employees to quit and positions other places, such as the California Men’s Colony.

The meeting was held at the district office and via online conference. Local resident Berkeley Baker attended the board meeting in person. He cited an example of three administrators hired who he said were unqualified, overpaid, and unnecessary. He said none of the three had specific prior experience, but were close friends of the former superintendent.

Related to the depletion of the budget reserve, the district had three chief business officers in four years. The board discussed how the turnover led to financial mismanagement. During Williams’ four-year tenure, the budget reserve dropped from 10-percent of the annual budget to less than 1-percent. Board president Chris Arend pointed out that Williams’ background was in human resources, not as a superintendent.

The school board discussed the previous board’s agreement to pay Williams more than $235,000 when he resigned. That payout was later reduced to about $100,000. Board President Arend, a retired attorney, called it outrageous. He said nothing in the superintendent’s employment contract justified the payout. Trustee Chris Bausch, who voted against the payout, said the separation agreement was without any basis.

The board also discussed the proposed Paso Robles Aquatics Complex. The grand jury called the proposed swimming pool complex an example of “extremely poor judgment” by the board and financial mismanagement. The district does not have the resources to build a $10 million dollar aquatic complex, in spite of voters in 2016 passing Measure M, a $95 million general obligation bond.

The board talked about the grand jury report from 9:10 a.m. to about 2:30 p.m. on Saturday. They agreed to continue the discussion Tuesday afternoon. Then, they are expected to discuss hiring counsel to determine if they should take legal action against the former trustees. The school board will meet at 4 p.m. Tuesday, Jan. 12, before the regular meeting of the PRJUSD School Board of Trustees.