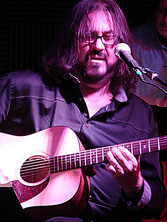 The Pine Street Saloon and Pioneer Troubadours announce a special music series “North County Line” to be held on Thursdays starting June 6 and continuing until the second week of July.

Kicking off the North County Line series June 6 will be Kenny Lee Lewis, local SLO musician and lead guitar player for the Steve Miller Band, joining Kenny on the inaugural night is special guest Grammy Award winner Louie Ortega. Opening up the evening will be Matthias Clark and Willy Nilly, local crowd favorites. Performances start at 9 and continue till the cows come home.

Starting Thursday June 6, Ryan’s Catering will be setting up a food trailer in the backyard of the Saloon Thursday, Friday and Saturday of each week. Owner Ron French is happy to announce a new live music sound system is being installed, along with a projector system capable of showing videos and music documentaries down the road.

The series will be a live event and will be run on a number of internet based platforms including a special HD channel on openfilm.com/channels/Pioneer-Troubadours a premier video and movie site, a joint effort by Robert Duvall and James Caan.

The North County Line Series is producing this series of shows to support The LINK. The LINK’S mission is to “support children, youth and families by providing services and linking resources to foster a safe, healthy and thriving community.” The LINK is a non-profit Family & Youth Development Organization, that runs a network of Family Resource Centers in North San Luis Obispo County and serves local youth and families by linking them to available resources and services, providing case management, and connecting them to concrete support in times of need.

About the Pine Street Saloon

The Pine Street Saloon is said to be one of the oldest buildings in downtown Paso Robles going back to circa 1860. The Building has had a very long and colorful history from the wild west days of Paso Robles when there were over a dozen saloons down Pine Street between 10th and 13th Streets.

A long list of outlaws, music icons, movie stars, and other colorful characters have bellied up to the bar at 1234 Pine Street. Historical characters including the likes of Jesse James, men that rode with Poncho Villa, early ranchers and railroad men all visited this old building.