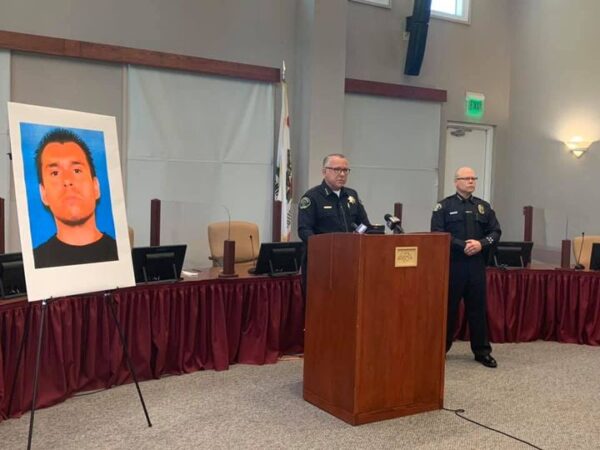 -Paso Robles Police Chief Ty Lewis and San Luis Obispo Police Chief Rick Scott held a joint press conference at Paso Robles City Hall on Tuesday to update the community on the deadly police shooting that occurred at Dry Creek Apartments early in the morning. The suspect, 32-year-old Steven Adam Calderon, is from Los Angeles and an investigation into the incident is ongoing.

On Monday at 3:56 p.m., Paso Robles Police Department units were dispatched to Dry Creek Apartments, located near the 2400 block of Branch Creek Circle, following reports that Calderon was involved in a domestic violence incident towards a woman, where he threatened to shoot her and had fired several shots from a handgun into the air.

At 5:30 p.m., the San Luis Obispo Regional SWAT team was activated to assist at the scene. Calderon refused to talk with a crisis negotiation team that was present, police say. The situation turned high risk as Calderon would leave and re-enter the apartment and initiated exchanges of gunfire. Different chemical agents, including tear gas, were utilized; Calderon responded at 1:15 a.m. when he exited the apartment and set the gun on a porch. Discussions were held between Calderon and the police units and the SLO Regional SWAT team, until Calderon lunged towards the gun and was fatally struck by gunfire from police. Medical attention was immediately performed; however, Calderon died from the injuries.

“Our patrol units initially responded with the Paso Robles Police Department to try to establish contact with Mr. Caldaron,” said Chief Lewis. “However, that proved mostly unsuccessful. It appeared that he would come in and out of the residence and yell various things at the officers. However and ultimately, they observed the gun that was described by witnesses and it was turned into a high-risk encounter for the police and for the community, so we decided to use our Special Weapons and Tactics team, which is a regional team made up of municipalities here in San Luis Obispo County. We all contribute SWAT operators to that team and they responded to help us serve an arrest warrant and search warrant,” said Chief Lewis, noting that three apartment buildings were evacuated.

No officers or residents were injured; the girlfriend was also removed from the scene when investigators arrived.