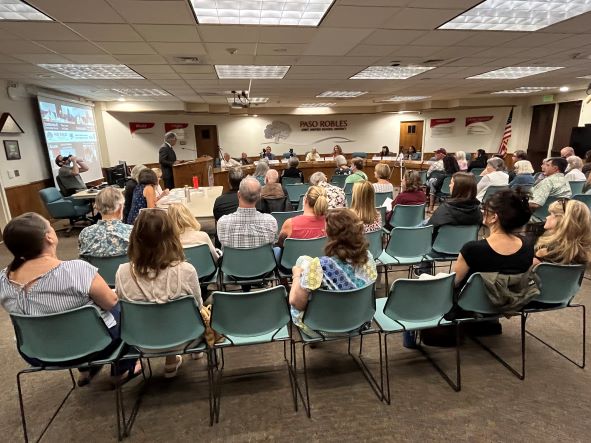 –  A school board candidate forum was held Wednesday evening at the Paso Robles Joint Unified School District office. The room was packed with attendees young and old. All but two of the candidates showed up.

The forum was conducted by the League of Women Voters and the American Association of University Women. The candidates each answered questions submitted by members of the audience.

The questions ranged from changes the candidates seek in the district, financial health of the district, learning losses due to remote learning during the COVID-19 pandemic, LGBTQ district policies, Critical Race Theory, declining enrollment, and the renovation of Georgia Brown Elementary school.

Hiteshew said she was concerned about the anti-Critical Race Theory climate in the school district and said, “It’s a non-issue.” She said she thinks Georgia Brown Elementary School should be renovated and made into a community school on 36th street. She also said, “Some teachers do not feel supported.”

Byrne said, “the district had demonstrated a definite lack of transparency.” The district not announcing a new LGBTQ section of the high school library is an example, he said. Another is the concept of a community school. “It’s a socialist concept, not how they describe it.” He gave his opinion in a recent letter to the editor.

Cogan said, “People are leaving the district. We’re spending $100 million to educate 6,500 students.” He said the district needs to attract more students. He suggested the district “open every library for two hours each day for students to study, research and get help to catch up from learning loss.” He said, “The community school is not a socialist plot.”

Triggs said he would focus on improving education. “California ranks 44th in student performance but has the highest funding for schools. 61% of property taxes go to fund schools.” He called Critical Race Theory “incredibly divisive.” He said, “We need to come together.”

McCoy said she thinks “smaller class sizes are important to education.” She said the district should stay away from Critical Race Theory.

Williams said “CRT is not in our schools. It’s never coming here. CRT is just one of many ways to explain the marginalization of disadvantaged people.” On the topic of LGBTQ issues, she said, “We have to acknowledge that we have a problem.”

Incumbent Arend said, “I authored a resolution banning CRT in PRJUSD.” Regarding LGBTQ issues, he said, “Sexual preference is not the business of the school district.”

A video of the forum is available to watch on the school district’s YouTube channel. The Tribune published a comprehensive article on the meeting here.

Two candidates did not attend: Jim Irving is a local real estate agent who started his education at a one-room schoolhouse in North County with four other students. He attended a private Catholic high school in San Francisco, and then went to Harvard University. Catherine Reimer has children in the Paso Robles School District and is also the superintendent of San Ardo School. Reimer has a Ph.D. in education from UC Santa Barbara.

Candidate Joel Peterson attended the forum but did not speak, as he’s running unopposed.

The election is on Nov. 8, but the vote-by-mail ballots will go out in early October.

Editor’s note: This story has been corrected. A quote originally attributed to Peter Byrne was actually spoken by Jim Cogan. The quote is “32% of third graders perform at the 3rd-grade reading level. That’s down 14% over two years ago. 68% of 8th graders do not perform at grade level.”