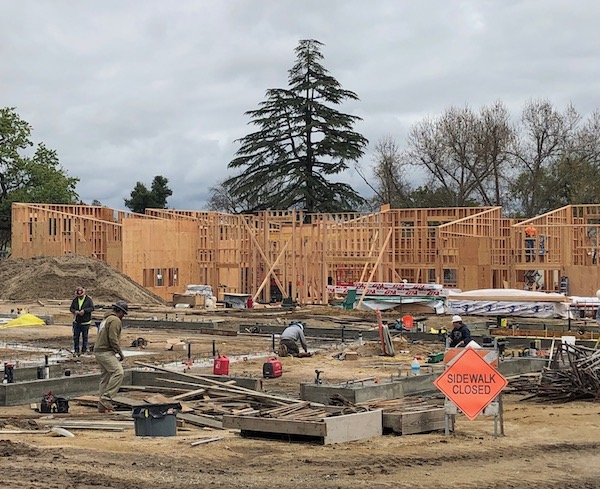 –While the Paso Robles Joint Unified School District Board of Trustees debate the future of Bauer-Speck School, construction continues at the old campus on Vine Street. Construction crews are working between rain squalls this week to build the new elementary school on property the district has owned since the late 1800s. Several decades ago, the school board discussed selling the property but learned the land was donated to the district by a family with the stipulation that if it were not used for a school, the land goes back to the family’s ownership.

On April 28, the school board will discuss closing the temporary Bauer Speck campus next year, which is located in portables next to Flamson Middle School. The campus started out badly in August of 2019. Air conditioning was not operative in the portables when teachers moved into the buildings from the old Vine Street campus. Then, a sewer backed up and exploded sewage into one of the portables. Excrement covered the interior of the kindergarten portable. Assistant Superintendent Carol Kenyon defended the situation, but during a walk-through with parents, administrators, and teachers, several parents said their kids were staying at Bauer Speck Arts Academy because of the excellent teachers and despite the failings of the administrators in preparing the temporary campus.

If Bauer-Speck Arts Academy students are sent to other elementary schools, the new Speck campus could be used by Georgia Brown Elementary School, which would give the district the opportunity to sell the current Georgia Brown school property to developers or perhaps to Almond Acres Charter Academy, which is looking to relocate to Paso Robles from their shared campus with Lillian Larson Elementary School in San Miguel.

The Paso Robles School Board is expected to make a decision on the future of Bauer Speck at its meeting April 28, which will likely be a virtual meeting on Zoom.