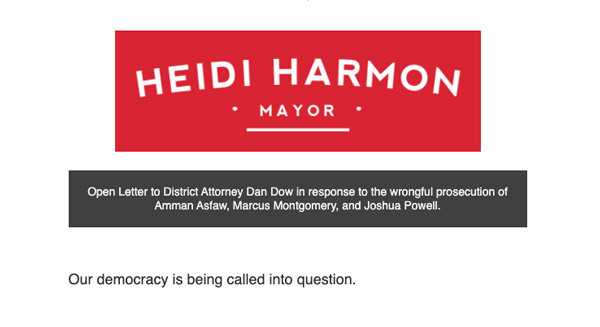 During the protest, some individuals were observed chasing down and throwing objects at a vehicle, and stopped and surrounded a vehicle, breaking its rear windshield. A San Luis Obispo police officer was assaulted and suffered minor injuries. Tianna Arata and Elias Bautista were arrested following the protest and charged last month. 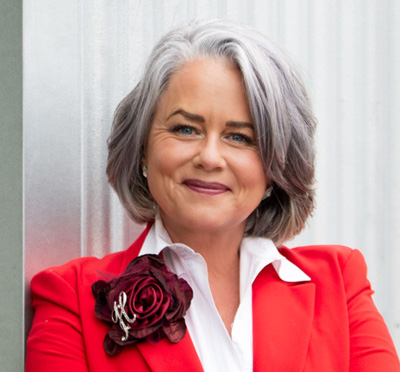 Harmon’s letter, emailed to supporters with a call for donations to her campaign, said in part:

Late Thursday night, three Black men were singled out for charges associated with their peaceful participation in the Black Lives Matters protests of this past July. Of the hundreds of people who protested peacefully, the district attorney has singled out these three Black men—leaders in our communities—from the mostly white crowd. These men have worked to bring a voice to our Black and Brown communities of San Luis Obispo. If Dan Dow gets his way, their activism this election will result in a prison sentence.

D.A. Dan Dow’s actions—to charge these community members for exercising the 1st Amendment—is nothing more than an intimidation tactic; telling our community members that they must be silent or be subject to arrest.

He is trying to draw attention away from the election, and create civil tension by issuing trumped-up charges against peaceful protesters. But together, we will not allow injustice to prevail…

Today, our county district attorney is using the power of his office to attempt to disenfranchise and silence three men of our town—and by proxy, the entire community these men work to empower through their activism…

The D.A. is enforcing the systemic suppression of community activism here in SLO and it sends a message: you are not safe to protest or to vote or to belong—if your skin isn’t white.

District Attorney Dow issued an official response to the criticism on Monday:

It has come to my attention that a local incumbent mayoral candidate pulled a political campaign stunt over the weekend by using my name and office to make preposterous false allegations. The mayoral candidate’s campaign stunt, intended to help her political fundraising, was untruthful as it intentionally misstated facts and fabricated allegations for political purposes. I am proud of the tireless work of my office to protect the people of our county through aggressive and fair prosecution of crime and protecting the rights of crime victims.

It is the duty of the district attorney’s office to thoroughly review every investigation to determine if the evidence proves that a crime was committed. We perform that duty every day without regard to individual characteristics such as race, color, religion, sex, national origin or political viewpoint. The mayoral candidate’s dangerous and divisive rhetoric seeks to stir more unrest rather than promote peace and healing in our community.  I will never compromise the integrity of this office by using race or public opinion to decide whether or not to file a criminal charge. My decisions will always be based on the evidence and the law.

On Thursday, at least four of the eight protesters will have a hearing in court. A rally is expected to start outside the courthouse on Thursday at 8 a.m., KSBY reports.