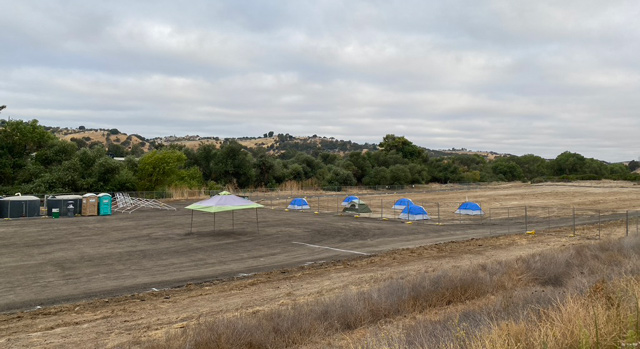 On Thursday morning, a few tents are set up in a partially-fenced area off River Road to accommodate homeless people living in the nearby Salinas Riverbed.

What is the city’s plan for a tent camp?

The plan is to create a temporary tent camp to relocate homeless people living in the Salinas Riverbed to several acres on Borkey Flats. It is located on River Road, about 1.4-miles north of Union Road, and a few hundred yards east of the Traditions neighborhood at the River Oaks housing development.

The decision to create the camp was driven by the risk of fires in the riverbed, city officials said. “What has driven us to this point is… when we saw that fire destroy two houses,” said Paso Robles Mayor Steve Martin. “That fire was not started by the homeless, by the way. But the same situation faces us now. How do we clear the riverbed so that we don’t have a fire danger? We are being forced to do this for public health, safety, and welfare.”

City Councilman John Hamon said, “The main reason that I started this whole discussion is to make a hardline stance to get people out of the riverbed,” which are causing the fires that could destroy more homes and property and possibly lives if they continue, he said. Camping cannot continue to be allowed in the riverbed where there is a “fuel-rich environment,” he said. There have been over 400 fires in the riverbed already this year.

After the city’s tent camping area is open, Hamon would like to have the police clear the riverbed of campers and ask them to re-locate to the Borkey Flats area.

The Paso Robles City Council met July 21 and discussed the agenda item: Salinas Riverbed Clean-up and Homeless Relocation and Services. At the urging of the Paso Robles Fire Department, city council members gave verbal direction to city staff to move forward with the plan, though the council did not take a vote to authorize the plan or funds to support it. Here is a link to the council meeting. The discussion of the homeless camp begins at about the 4:04:50 mark. 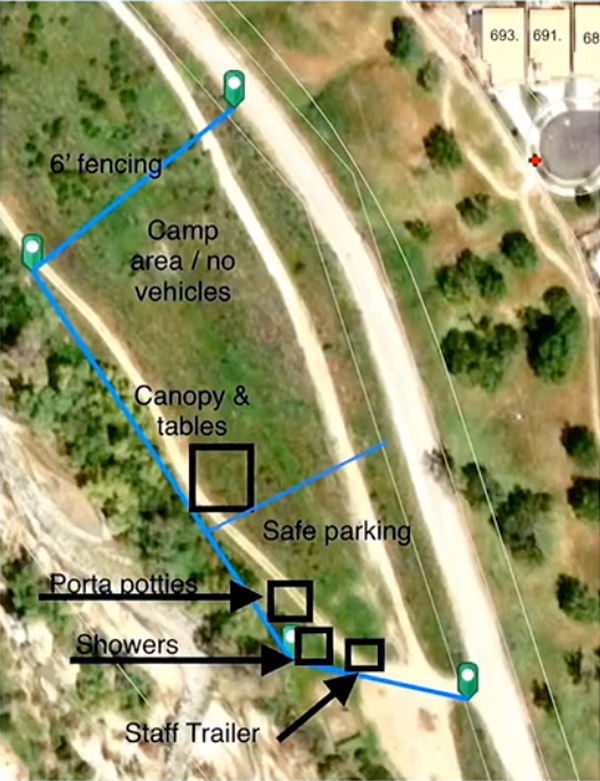 A site map of the temporary homeless tent camp in Paso Robles.

What are the amenities at the tent camp?

The facility will have fresh water, porta-potties, a temporary outdoor shower, small camping tents, a covered common area, lighting, daily food service at 5 p.m., and case managers from ECHO homeless shelter who help connect people with services they need. The parking lot will provide a safe parking program similar to those in other cities in San Luis Obispo County.

“It will provide a safe clean place for people who want to take advantage of those amenities,” Mayor Martin said.

When will the new tent camp open?

The city had tent camp start operations on Wednesday, Aug. 5. 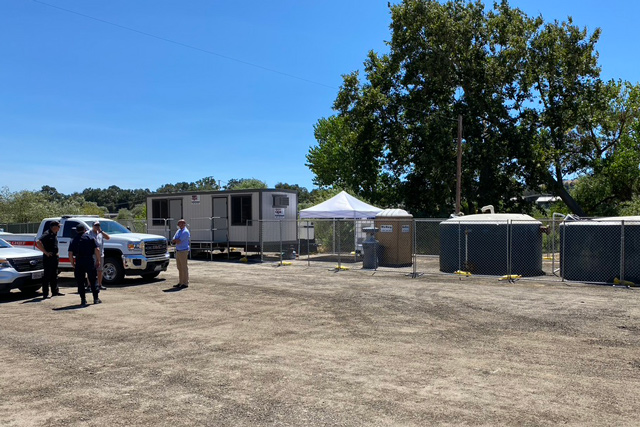 A temporary office, porta-potties, and water tanks are set up on the Borkey Flats area on the north end of town along the Salinas Riverbed.

How many homeless can this temporary facility serve?

The tent camp is initially being set up to serve 20 homeless people but is able to expand to help 50 or more. “We know there are more than that in the river bottom,” said City Manager Tom Frutchey at the council meeting.

How many homeless live in the riverbed?

A 2019 census of homeless people in Paso Robles counted 221 unsheltered people. Paso Robles Battalion Chief Randy Harris said homeless people in the riverbed live primarily in two groups. About 50 camp north of the 13th Street Bridge and live in a somewhat organized society with their own mayor, he said. He estimated another 100 live around the Niblick Bridge in a more scattered fashion. The area north of the 13th Street Bridge has the greatest risk of fire, and that is why the city is starting there, he said. 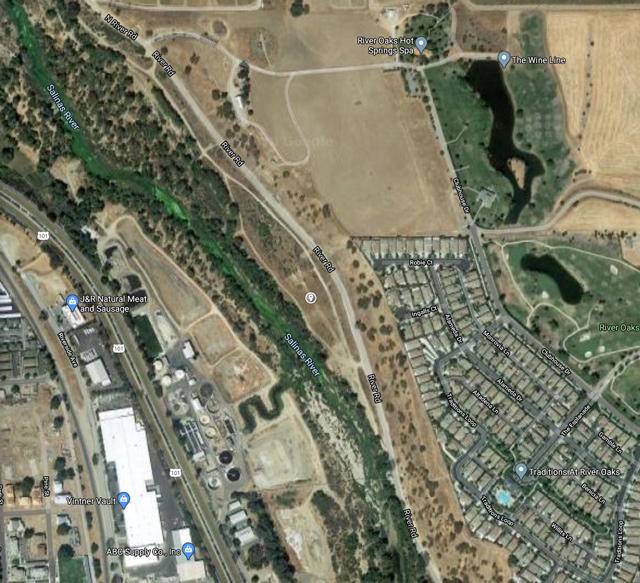 The marker in the center of this map shows the location of the new homeless camp.

How much will the tent camp cost the city?

Initial reports at the city council meeting estimated the costs could run as high as $1.2 million over a year. The city manager said the cost to set up the project could be $35,000, plus $65,000 in monthly operating expenses. The budget is not final and it is unclear how much of the expense could be offset by grants. “It’s an astounding cost,” the city manager acknowledged.

So far, costs are coming in under initial estimates, according to Battalion Chief Harris. Most of the supplies for the site were resourced from existing city assets, including the water tanks, and gravel for the parking lot.

He said fixed monthly rental costs are about $3,500, which covers rental fees for fencing, porta-potty service, water service, a generator, lighting, and a temporary office building. A contract for evening security will cost about $17,000 a month, he said.

Foodservice and case management will be provided by ECHO homeless shelter and Paso Cares at no additional expense to the city.

“It’s going to be a very expensive proposition,” said Mayor Martin. “But I can only ask, how expensive will it be if another fire is started and it does burn homes and it does kill people?”

Where are the funds to pay for the new tent camp coming from?

The money for the tent camp project is coming from the city’s general fund. Last month, the city council authorized $278,000 to the fire department for fuel abatement and cleaning up the riverbed. While the council discussed spending over a million dollars on the tent camp, it did not take a roll call vote or authorize new funding at this time.

Why can’t the city enforce a camping ban in the riverbed now?

The 9th U.S. Circuit Court of Appeals issued a landmark decision on homeless camping last year. It said that if a city doesn’t have enough shelter beds available, enforcing a camping ban violates the constitutional ban on cruel and unusual punishment. Creating a tent camp for the homeless at Borkey Flats fulfills this legal obligation, the city believes.

Additionally, the costs of prosecuting homeless people are substantial, said Paso Robles Police Chief Ty Lewis. The San Luis Obispo District Attorney does not typically prosecute homeless cases, he said. The city cannot take individuals to the county jail for violating city ordinances, and besides, the state is ordering inmates held on minor offenses to be released, he said.

Will this plan work?

That is unknown. “This plan is just a start,” said City Manager Frutchey. “This is a partial solution.” He said he expects this temporary plan to last six to 12 months.

Battalion Chief Harris called the project a “proof of concept.” If it works, it can be expanded upon.

Jeff Al-Mashat, homeless services director with ECHO, said the situation is complex. “There is going to be a level of trauma among the homeless by uprooting the camps they already have.”

“There has been a narrative that people living in the riverbed want to be there and this is what they have chosen, but that is a handful and a minority,” Al-Mashat said. “Many are working and have jobs and are part of the Paso Robles community,” he said. There are others with disabilities, mental health issues, and addiction problems, he said.

“How many people will want to come to this camp? We don’t know,” Al-Mashat said.

What are the alternatives?

Another solution could be housing homeless people in motel rooms, as Gov. Gavin Newsom has pushed for with his Project Roomkey plan during the COVID-19 pandemic. That would be more expensive than the tent camp, said City Manager Frutchey.

Mayor Martin brought up the idea of using the old El Paso de Robles Youth Correctional Facility near the airport. Frutchey said using the site raises a number of complex issues with the state. The state would require the city to take full responsibility for the entire site and create a plan for using it. So using a portion of the site for homeless is not an option right now, he said. The state is “throwing up so many roadblocks,” Frutchey said.

What about the permanent homeless facility?

The city had planned to build a permanent Homeless Services Center on Sulpher Springs Road that would house nearly 40 people and be administered by ECHO. Those plans have been shelved, according to officials with the city and ECHO, because of a cost-prohibitive Cal Trans request for a pedestrian walkway to cross Highway 101.

Almost $1 million in grant funding for the project could expire next year. Al-Mashat said ECHO is still looking for a permanent homeless shelter solution in Paso Robles that could utilize the funding.

Editor’s note: Following our original report on the City of Paso Robles planning a new tent site for the homeless living in the Salinas Riverbed, we received a number of inquiries for additional details about the plan. We conducted interviews, reviewed city documents, and Paso Robles City Council discussion to bring our readers more details.