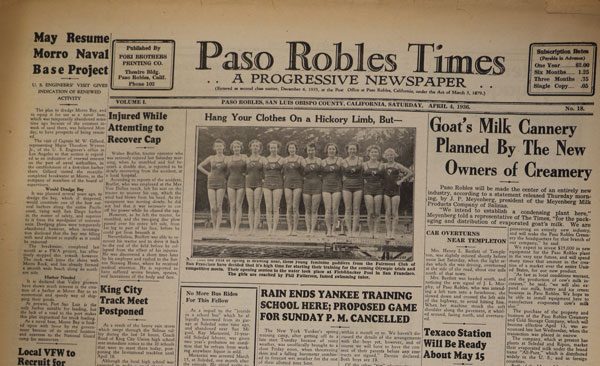 The New York Yankee’s spring training camp, after getting off to a late start Tuesday because of rainy weather, was unoffiically brought to a close Friday noon, when threatening skies and a falling barometer combined to forecast wet weather for the rest of their allotted time here.

The heavy rain of Friday afternoon, left the grounds too soggy for further use this week, and the exhibition game scheduled for tomorrow has been cancelled. A majority of the boys, many of whom came to Paso Robles from distances as far away as Seattle and Idaho Falls, left for their homes soon after it became apparent that further workouts would be impractical.

Of the nearly 80 youths who passed in review before the trained eyes of Yankee scouts this week, there were eight who showed better than average ability on the diamond, according to Joe Devine, veteran seeker of major league material. Two of these, he said, show almost immediate prospects of developing into class A rookies.

After watching them for four days, Devine said, ”we have picked “Kewpie” Lewellyn, catcher with the Cal Poly nine, and Joe Erano, also a catcher, of San Jose, as most likely to succeed in professional baseball.”

If present plans mature, we will send them out to one of our “farm” clubs, probably Joplin, Mo. Lewellyn will leave after he finishes school in June, and Erano will probably go there within a month or so. We haven’t discussed the details of the arrangements with the boys yet, however and of course we will have to have the consent of their parents before any contracts are signed,” Devine declared. Both boys are 19.

Of the other “top” players, two are pitching material, two are second base, one first base, and one fielder. While they will not be sent to any Yankee clubs this season, Devine said, the club will continue to watch their development and in all probablity will find places for each in next year’spring training camps.

“We scouted approximately 80 players during our week in Paso Robles,” Devine said, “and on our biggest day, we had 66 men in training at the local ball park. Our visit has been most successful in spite of the ‘unusual’ weather, and we will probably return to Paso Robles year after next.”

Devine, himself a veteran scout, was assisted by Bill Essick and Bob Coltrin of the Yankee training staff. During the series of workouts, they gave instructions to the would-be major league players, and to the local high school team.