– An indication of what Paso Robles may see at its municipal airport as its facilities are improved and its excellence becomes more generally known was demonstrated last Saturday and Sunday when ten planes carrying 17 members of the “99” club, national licensed women pilots association, landed at the field.

The occasion for the gathering was the annual convention of the southwest section of the club which was held at the Paso Robles Hot Springs hotel. Arrangements for the convention were made by Manager E.W. Santelman in cooperation with the Chamber of Commerce and Business and Professional Woman’s club, and local flying enthusiasts. 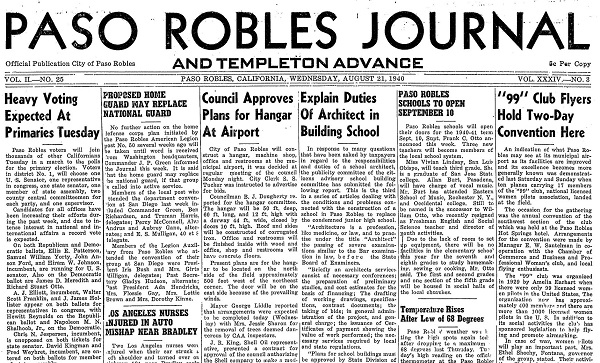 In case of war, women pilots will play an important part, Mrs. Ethel Sheehy, Fontana, governor of the group, stated. Their activities will include ferrying ships and other non-combatant duties which will relieve men for actual fighting, she said.

The visiting flyers were escorted from the field to the hotel by the local flying school. A duck dinner for the visitors was co-sponsored by the Business and Professional Woman’s club under the direction of President Myrtle Hedgpeth.

A feature of the dinner was the colored motion pictures shown by Bessie Owen, Santa Barbara. These pictures were taken by Miss Owen on her various flights over South America, Europe and other continents. Each visiting flyer was a guest of a local clubwoman.

Following the dinner, dancing in the Green room was enjoyed with members of the local flying club and aviation enthusiasts acting as escorts. Music was provided by Dutch Higgins and His Lads, and decorations by the BPW club.

Outstanding among the planes was the $14,000 Beechcraft owned by Miss Owen. This plan was specially built for the famous English aviatrix, Amy Mollison and when Mrs. Mollison was unable to accept it, Miss Owen purchased the plane while it was still crated. The interior of its cabin is luxuriously furnished and its equipment was the best and most complete known at the time plane was manufactured.

Besides flying in five continents, Miss Owen is a deputy sheriff of Santa Barbara county and uses her plan in various phases of aerial enforcement, ferrying prisoners and dropping food to fire fighters.

Miss Owen, Miss Wakeman and Mrs. Sheehy all possess commercial licenses and Mrs. Sheeny has an instructors rating. Mrs. Sheehy was second to Ruth Chatterton in the 1935 Women’s derby.

All visiting flyers expressed their appreciation of the hospitality extended by Paso Robles and stated they planned to return as soon as possible. The excellent potentiality of the municipal airport also was praised.