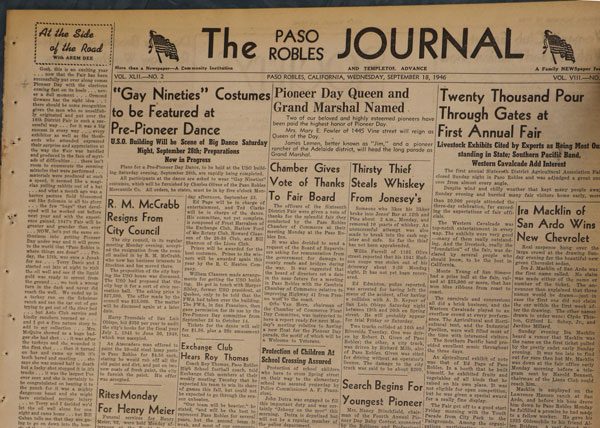 Despite wind and chilly weather that kept may people away Sunday evening and hurried many fair visitor home early, more than 20,000 people attended the three-day celebration, far exceeding the expectations of fair officials.

The Western Cavalcade was top-notch entertainment in every way. The exhibits were very good — may of them really outstanding. And the livestock, really the “foundation” of the fair, was declared by several people who should know, to be the best in California.

Monte Young of San Simeon had a prize bull at the fair, valued at $35,000 or more, that has won blue ribbons from coast to coast.

The carnivals and concessions all did a brisk business, and the Western Cavalcade played to an overflow crowd at every performance. The Agricultural land Horticultural tent, and the Industrial Pavilion, were well filled most of the time with interested visitors.

An agricultural exhibit of note was that of Ed Page of Paso Robles. In a booth that he built himself, he exhibited fruits and vegetables of all kinds that he raised on his own place. It was not eligible for open competition, but he was given a special award for a really fine display.

The Fair got off to a good start Friday morning with the Youth Parade from City Park to the Fairgrounds. Among the organizations participating were the Templeton High School Fife and Drum corps, 4-H Clubs of Templeton and Paso Robles, Blue Birds, Campfire Girls and Boy Scouts of Paso Robles, and many boys and girls on horseback. Si Otis and his educated mule, members of the Western Cavalcade organization, furnished many laughs for the spectators.

At the Fairgrounds they were greeted with speeches of welcome by Julian A. McPhee, president of Cal Poly, Byron J. McMahon of Cal Poly, George Flamson, local superintendent of schools, and Herbert C. Sutton, president of the Fair Board. George Stephan, executive secretary, acted as Master of Ceremonies.

Saturday was another gala day at the Fair, with an estimated 7000 people in attendance.

The horse parade at ten in the morning was a very colorful affair, with many gaily garbed cowboys and cowgirls astride their beautiful horses. At its conclusion a welcome to farmers was given by Senator Chris Jesperson and Assemblyman Fred Emley.

In deference to the churches of Paso Robles, there was no program Sunday morning, but horse races and the Western Cavalcade featured Sunday afternoon, as they did Saturday.

At seven in the evening came the drawing or the new Chevrolet, which was won by Ira Macklin of San Ardo. The Western Cavalcade, dancing and fireworks featured both Saturday and Sunday evenings.

And so our first annual fair is over. It is expected by fair officials that it will show a profit of a few hundred dollars, but whether it does or not, it was a great success, and the officials gained a million dollars worth of experience, which will be of benefit in the future.

Al Ferrini, chairman of the County Board of Supervisors, had this to say “I sincerely believe that the Sixteenth District Fair is in its proper location at Paso Robles. It is midway between the fairs north and south — that is, King City and Santa Maria.”