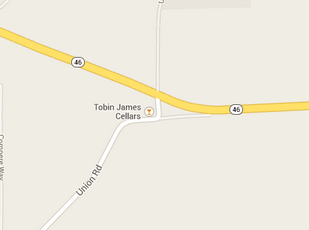 Ryan Bogunda, 24, of Santa Maria was attempting to cross the highway in a Caterpillar Motor Scraper, the California Highway Patrol reports. Driver Severo Mares, 31, of Tulare and his passenger Refugio Ramirez, 24, of Visalia were traveling east bound in a 2005 Chevy dually truck and collided with the Caterpillar’s front right tire at about 5:42 a.m. 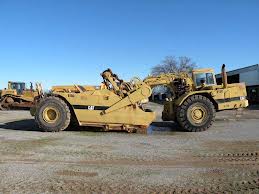 Example of a Caterpillar Motor Scraper.

Mares and Ramirez were trapped. Cal Fire firefighters extricated them with “The Jaws of Life.” They were taken to Sierra Vista Hospital. Borgunda was not injured.

The collision is under investigation by the CHP.

Cal Fire was at the scene at 6:39 a.m. and reported a “vehicle vs. skip loader” accident near Tobin James at Union Road. The first victim was removed and taken to Sierra Vista Hospital, according to Cal Fire.

By 7:14 a.m. the patient has been extricated and was being transported to the hospital. Fire personnel from Cal Fire and the city were clearing the scene.

Both lanes of eastbound traffic were blocked for an unknown amount of time. CHP initially asked people to avoid the area. By 7:50 a.m. the road was open with no backups, according to a CalTrans supervisor.