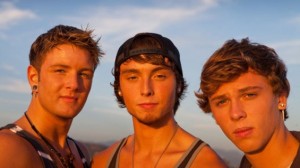 The California Mid-State Fair is pleased to announce that Emblem3 has been booked for two shows on Thursday, July 18th at 6:30p and 8:30p on the Frontier Stage.

The band will be appearing tomorrow morning (Friday, June 7, 2013) on Good Morning America’s “Summer Concert Series” from Central Park in New York City. The show and band’s appearance can be seen on ABC-TV (KEYT-TV) between 7:00a – 9:00a.

Emblem3 is a hit breakout band from the show X Factor. The band consists of brothers, Keaton and Wesley Stromberg, and lifelong friend, Drew Chadwick. In April, they kicked off their highly anticipated “Goin’ Back 2 Cali” tour, a series of free, fan-driven shows that is quite literally “by popular demand.”

Emblem3 has worked with some of the most elite songwriters in the industry such as Joel Madden of Good Charlotte, Jack Antonoff of Grammy-award winners fun., and Nicki Minaj and Ke$ha collaborator Kool Kojak.

Emblem3 highlights their astounding range in positive, empowering and catchy singles such as “XOXO,” “Just For One Day” and lead single “Chloe (You’re The One That I Want).”