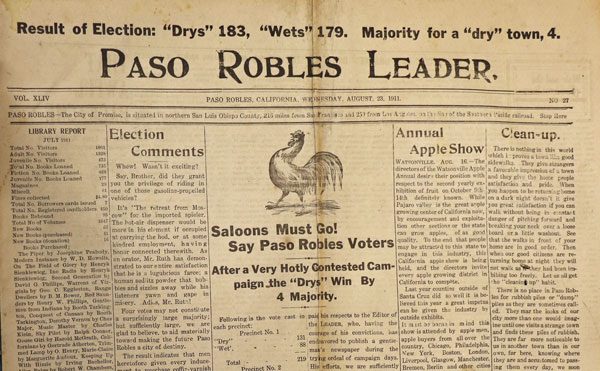 Following is the vote case in each precinct: 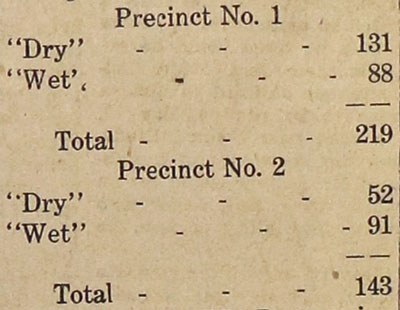 Long before the polls opened everyone was hustling and scurrying about, in nervous haste it was evident from the outset that a surprisingly heavy vote would be cast. Citizens gathered into groups and eagerly discussed the situation in all it’s various phases, both from sane and insane viewpoints.

Saloon keepers complied with the law in regard to closing their places of business while the voting was in progress, and no disturbance marred the proceedings. It was a “dry” day even for those arrayed on the “wet” side of the issue.

Several automobiles were utilized by the saloon element in conveying many to their voting places; and some thus favored would thank the chauffeur for the ride, the stalk into the booth and register their “Noes” with quiet determination. You cannot alter a man’s view of a political issue by conveying him to the polls via chug-buggy.

The imported spellbinder was again on deck election eve, doling out his usual amount of guff and sidestepping the real issue with great adroitness. Mr. Ruth contemplates a speedy return to Washington, and will in all probability confine his future efforts to a cause more gentlemanly and prolific of good than is found in parading as a champion of bad whiskey, vice and corruption. Of course, the effervescing oracle paid his respects to the Editor of the LEADER, who, having the courage of his convictions, has endeavored to publish a gentleman’s newspaper during the trying ordeal of campaign days. His efforts, we are sufficiently egotistical to believe, (if such belief can be termed egotism) have aided in no small measure in bringing this campaign to its happy termination.

True, it is that all has not been smooth sailing for the editorial and mechanical departments of THE LEADER during the trying and strenuous days preceding the election, when extra editions and loads of other printed matter remained to be gotten out in a hurry-up order; but now that the returns and the results are known, we gaze back with no small degree of satisfaction upon the days of laborious toil and nights of restless anxiety. THE LEADER has found in the ranks of decency and has no apologies to make for its stand. And had the voters decided the question negatively, this newspaper would have yet continued in business at the same old stand, fighting as in days agone, but with renewed energy and determination, for a clean, progressive and healthy Paso Robles.

As the shades of night were falling and the result of the election became know n a pall of deepest gloom settled o’er Whiskey Avenue, and saloon men and their satellites conversed in subdued tones of voice. Their day of judgment, so long deferred, had come at last and only to well did they realize it.

As the curtains of time are pulled aside, we peer into a no dim and distant future and behold a rejuvenated city; a city that no man need hesitate to call home; a city of happy, God-fearing people–and that city, Paso Robles.