Is oil fracking going on in Lockwood? 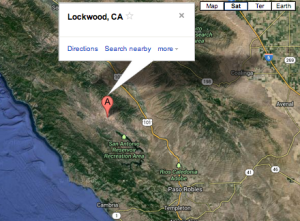 From KALW – Hydraulic fracturing, commonly known as “fracking,” could be a revenue bonanza for California. The nation’s largest reserve of deep-rock oil is in our state’s Monterey shale, stretching under the Central Valley and Central Coast to Los Angeles. In fact, it’s nearly two-thirds of the entire country’s deep rock deposits, containing 15 billion barrels of oil. That could translate into hundreds of thousands of jobs and almost $25 billion in tax revenues by 2020.

Yet, the process for extracting that oil remains a mystery. Oil companies aren’t required to disclose the proprietary chemical cocktails they use to shake up the earth that locks in the oil. In fact, in California, fracking remains nearly unregulated.

Twelve legislative bills were proposed in 2013 to regulate fracking or put a moratorium on the process. Ten of those were stalled or killed, so fracking continues.

In Monterey County, there’s a tiny agricultural town called Lockwood that finds itself at the center of the fracking debate.

“There are people going around and buying up leases either in order to get drilling permits or leases to buy water- they are somebody that is representing an oil company,” says Paula Getzelman, who owns Gatti Vineyards in Lockwood with her husband. “They tend to fly a little bit below the radar. So, it is very difficult to know who and how many they have acquired, because it’s a private sale. They lease the mineral rights to the oil companies.”

Getzelman is one of many residents who spoke with KALW’s Daphne Matziaraki as she reported on fracking in and around Lockwood. Below are the reflections of Lockwood residents, as they with how to deal with the future of fracking.

What is hydraulic fraking

Hydraulic fracturing is the fracturing of localized rock by a pressurized liquid. Some hydraulic fractures form naturally—certain veins ordikes are examples. Induced hydraulic fracturing or hydrofracturing, commonly known as fracking, is a technique in which typically lease water with fresh water combined is mixed with sand and chemicals, and the mixture is injected at high pressure into a wellbore to create small fractures (typically less than 1mm), along which fluids such as gas, petroleum and brine water may migrate to the well. Hydraulic pressure is removed from the well, then small grains of proppant (sand or aluminum oxide) hold these fractures open once the rock achieves equilibrium. The technique is very common in wells for shale gas, tight gas, tight oil, and coal seam gas and hard rock wells. This well stimulation is only conducted once in the life of the well and greatly enhanced fluid removal and well productivity. A different technique where only acid is injected is referred to as acidizing.

The first experimental use of hydraulic fracturing was in 1947, and the first commercially successful applications were in 1949. As of 2010, it was estimated that 60% of all new oil and gas wells worldwide were being hydraulically fractured. As of 2012, 2.5 million hydraulic fracturing jobs have been performed on oil and gas wells worldwide, more than one million of them in the United States.