Indecent exposure cases may be related

On Friday, August 16, 2013 at about 11:34 a.m., a Paso Robles police officer was flagged down by a female subject in the parking lot of a shopping center in the 2300 block of Theatre Drive. This subject reported she had been the victim of an indecent exposure which had just occurred.

Police officers searched the area but were unable to locate this suspect.

On Monday, August 19, 2013 at about 11:02 a.m., the police communications center received a report of an indecent exposure which had just occurred in the parking lot of the McDonald’s restaurant in the 2700 block of Black Oak Drive.

The victim called the police but attempts to locate the suspect were unsuccessful.

The victim described the suspect as: white male adult, 20-25 years old, heavy set, last seen wearing a black t-shirt with white lettering or a white logo on the front, blue jeans, and a green baseball cap with a red tipped brim.

The victim identified the suspect vehicle from business surveillance video, and a still image of this vehicle is attached below: 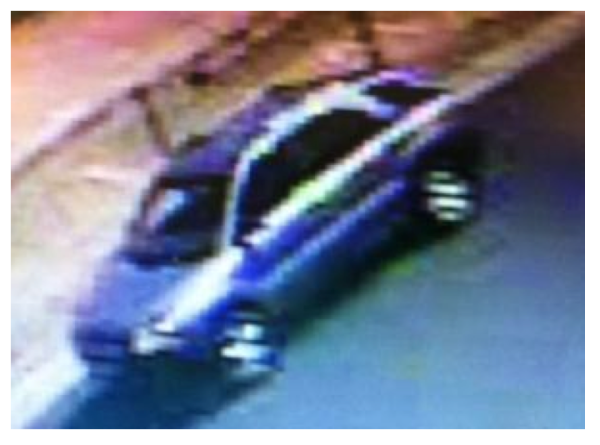 This vehicle appears to be a four-door, small SUV or crossover, blue or gray in color with a black roof/luggage rack.

This investigation is ongoing, and the police is seeking assistance from the public. Anyone with information is asked to call the Paso Robles Police Department. Persons wishing to remain anonymous can contact Crime Stoppers at 805-549-STOP or submit a Web Tip from the Crime Stoppers website at http://www.slotips.org. You can also submit a “TEXT TIP” by texting “slotips” and your message to CRIMES (or 274637). You do not have to give your name.