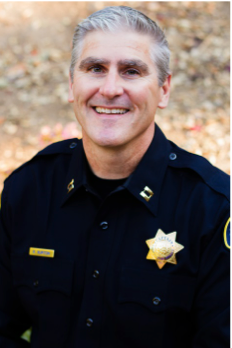 Robert Burton was selected as the new Chief of Police for the City of Paso Robles at last night’s city council meeting. The announcement comes following a nationwide search and competitive hiring process. Applicants from across the country applied and interviewed for the highly sought-after position. He replaces Lisa Solomon who resigned last year while under investigation.

Mr. Burton has lived in San Luis Obispo County for 43 years and has been with the Paso Robles Police Department for 17 years. During his time with the department he served as a patrol officer, traffic officer, and a sergeant supervising both the patrol and detectives units. He was promoted to the command level serving as a lieutenant and then captain in 2007. Since March 2012, he has served as the acting chief of police.

“Robert has provided Police support to Paso Robles through the growth of the 90’s, 2000’s and the ‘great recession’,” said city manager Jim App. “The city council and I have been very pleased with his effectiveness in steadying the department during a period of great turmoil and transition, and especially in bringing renewed attention to and on the local drug problem. We look forward to his continued leadership in maintaining the safety and security of Paso Robles.”

“I am deeply honored to be leading a department filled with very talented people,” said Burton. “The employees of this law enforcement team work hard every day to make a difference for the community of Paso Robles and I am proud of their accomplishments.”

As Paso Robles’s police chief, Burton plans to rebuild and strengthen the department after the challenges associated with the recession, according to a press release from the city. This rebuilding will require much effort to interface with the community and to maintain strong teamwork within the police department and city. Burton’s other main goal as chief of police is to address illegal drug use and gang activity in the city, as evidenced by his recent revival of the department’s Special Enforcement Team.

Robert is a graduate of San Luis Obispo High School and received his Bachelor of Science degree from California Polytechnic State University in San Luis Obispo. He resides in San Luis Obispo County and has been married to Stacia for 23 years, and has two children, Clark and Quincey, who attend high school.

The city plans a formal swearing-in ceremony for chief Burton on July 2, 2013 at 6:30 PM in the City Hall Council Chambers. Members of the public are invited and encouraged to attend.